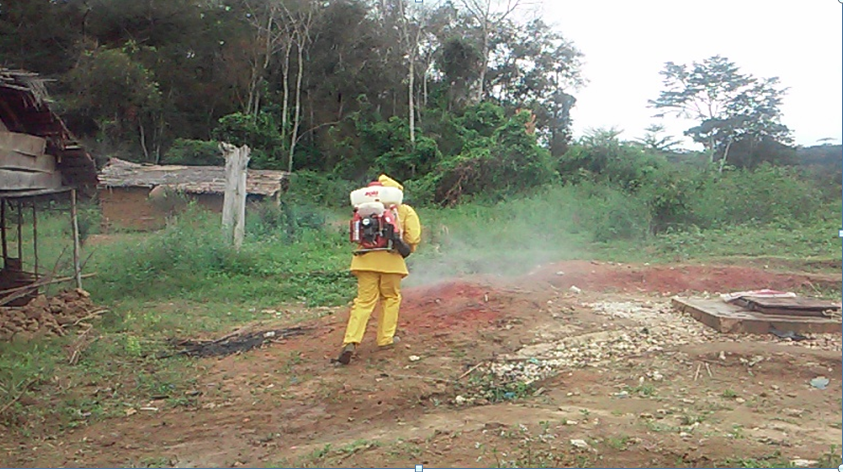 Gbarpolu County – A plan to do further spraying and impact assessment on the caterpillar worms invasion in more than 16 towns and villages in Bopolu and Belle Districts, Gbarpolu County did not materialized as scheduled due to heavy down pour of rain and other factors, while locals in affected communities have increase calls for government to pay more attention.

The Ministry of Agriculture (MOA) early last month pronounced the caterpillar worms’ invasion as an outbreak, calling for quick action to combat the worms. In early June 2016, locals in Bopolu and Belle Districts alarmed to the Agriculture and Health Ministries about the caterpillar worms’ encroachment on their farms, towns, villages as well as drinking water sources.

“Since Saturday, June 25, complaints have been flowing to our offices about these caterpillars and we moved in later and started spraying beginning with Lowoma in Bopolu District. Because of the importance attached to this, my Minister asked that we get more spray.” Madam Weedor A. Cegbe, MOA County Coordinator told LocalVoicesLiberia.

The MOA County Officer then requested for more sprays, gasolines and technical and logistical support to enable them move to intervene at more affected towns.

This calls for prompted partnership meeting held on July 11, 2016 at the MOA offices in Bopolu City. MOH, IOM/OIM, the LNRCS and WHO, all agreed to collaborate in order to move in Belle District and support the MOA’s efforts in combating the caterpillars.

During the joint meeting the MOA boss disclosed that they have been able to spray eight affected towns and villages in Bopolu District. “With the little support we got from central office, about 45 gallons of gasoline, some chemical, rain gears, and nose masks, we have been able to sprayed only eight affected areas,” Madam Weedor said. “My car is down, only 2 Yamaha motorbikes we have in the county, (so) the MOA’s Assistant Minister for Extension personally help us with L$5,000.00, and they have asked us to seek partners support in the county to help us in this process.”

She added that her office is struggling to reach in Belle District due to the lack of limited support and bad roads. But she added that partners at a recent meeting have pledged to support the campaign against the insects.

Kelvin S. Brown, WHO representative in the county said: “We will forward this to our office and wait for their response.”

OIM/IOM committed to providing logistics support through their county operation plans to intervene on July 14 has not been implemented by the team due to the death of one of the IOM field staff at the Chief Jallah Lone Medical Health Center in the county.

Meanwhile, citizens in some affected areas continue to decry the condition of their drinking water sources which have been contaminated by the caterpillars or polluted by chemicals used to raid the insects.

“These things came here and we used gasoline and fire to burn them, but they still used to come; later people came and sprayed them. They were all in the well. We are just living by God’s grace here,” a community leader, Junior Varney told LocalVoicesLiberia.

Also, inhabitants of Emma Village said the worms entered their homes and polluted water stored for domestic used. “The caterpillars were all around my house,” said Yassah Flomo. “We moved from inside this house to another, (and) I just want to say thanks to the people that came here and spray them at least thank God I am back in my house”, she added.

According to the Town Chief of Tawalata, the worms’ invasion has created setback for many people especially vegetable farmers in the town. Said Chief John Flomo : “We want to say thank God for the rain because government delays to come to help us even up to present did not reach some communities”.

Mr. Flomo says it was due to the down pour of rain that killed the worms on various farms but he also doubted the capacity of government in combating unusual outbreak. “My worry is whether our government can protect us in times of any bad sickness,” he asked.

Locals in Belle District are similarly concern about the limited attention government has attached to the caterpillar outbreak, which they say, have damaged their farm produce.

Mr. Alexander Quaquai, a youth advocate and teacher of Belle says: government over looked some things and these are things that bring about bad-bad sickness”.

He added that despite the complaints by citizens in the area, and reports by the District Health Team in Belle District, help is yet to go to some affected communities.

Added Mr. Quaqua : “How will these people know what went wrong? How these worms affected us-looking at our drinking water and even how can they determine help for affected farmers”.

Report by: Henry B. Gboluma, Jr.