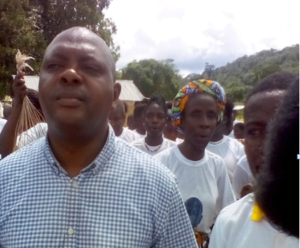 The citizens, in their petition statement, assured Cllr. Varmah their unanimous support based upon “his good work within Bopolu District and other parts of the county”.

Reading the statement on behalf of the citizens, a first-time voter, Kula Torsu, mentioned several reasons for their support to Mr. Varmah’s candidacy including the empowerment of the youth through education, empowerment of women in the district and other development initiatives.

“Because of your love for this district by catering for the citizens and being hard working, we the peace loving citizens of Farwen-Town and its soundings, say amongst the many 2017 aspirants for this district, we choose you as the best amongst all, and therefore hereby petition you as our only and best candidate to contest in the 2017 for the Representative seat for Bopolu District (district 1), so as to unseat our current lawmaker who has failed us over the past years. Kindly accept our petition. We will give you our fullest support until victory is achieved,” the statement read.

Fofee Fofana, another constituent who hails from Medina Town, pointed out some of the significant interventions the representative aspirant has made for the district. He mentioned  LRD$40,000.00 scholarship fund to Bopolu students at the University of Liberia as the most important.

“Hon. Varmah services to this country and to our communities cannot be overemphasized and therefore let me asked you to think in the right direction for our children’s tomorrow,” Fofana said.

Kamara David, speaking on behalf of the head of delegates from several communities within the constituency, said “It’s time for a change in Bopolu District,” stressing that politicians who have refused to fulfill their promises until now and are coming to them with “falsehood development” shall be rejected at the ballot.

“How someone spent almost six years and only a few months to October 10, he is rehabilitating road for us? We think this is unfair and we must vote him out,” David said.

Like Kamara, many in the district believe that lawmakers in Liberia are misusing taxpayers’ money to enrich themselves and are unilateral implementing projects in their own name at the disadvantage of their constituents – the ordinary citizens.

They, however, encouraged Cllr. Varmah to remember them when elected and said he should always involve them in they termed as ‘government’s decision making’.

Accepting the petition, Varmah said he was proud that people of Bopolu District, especially in Farwen Town do not want to “throw away development by electing someone who will not properly represent them”. He described Bopolu District as the oldest political administrative district in Liberia when he recalled the history of King Sao Boso.

“When Bopolu District is the oldest political district in Liberia, then it must not be associated with incompetence. It means that we must produce quality,” the representative aspirant said.

“Our friends are laughing at us so much because our current lawmaker is so mush uneducated; he has not performed anything. You have petitioned me to contest this coming election and I hereby agree to contest in the 2017 elections”.

As a public servant with a degree in Law from the University of Liberia with several other national and international specialized training, Varmah boasted of being the “most competent aspirant in Gbarpolu District #1 race”.

While taking an oath to assured his commitment to his supporters, he promised that when elected he will work along with them – women, youth, children and physically challenged people.

“If I want to use the citizens of Bopolu District only to be elected as a representative and turned my back like other people, God must not bless me. But if I am coming there, and my election will help Bopolu District and other parts, God must bless me,” he said.