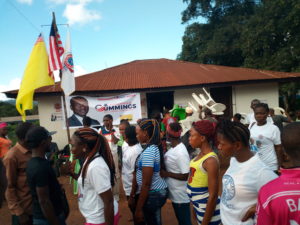 Bopolu, Gbarpolu County – The head of rural women in Gbarpolu County says voters should reflect on the challenges of education, health, and roads facing the county when they go to the polls on October 10, 2017.

“So, it’s about time that we campaign to vote right and vote people who are thinking about our children’s health and education. If God gives us the good leader, I know our children will benefit because our time is finished now.” – Alice David, Head of Gbapolu County’s rural women association.

“People children them (children in other countries) are going to school but Gbarpolu children are not going because we do not have the hand,” she said.

“In some places, no good roads, and clinic far from them – how can they go to the clinic when they get sick while in class? No network (cell phone network) to even call, so if they are not healthy, they will not sit in class”.

The popular female leader in the county was speaking during a political rally organised by Alternative National Congress (ANC) on August 5.

She called on electorates to vote for candidates who will prioritise education, roads and health care.

“It is about time that those who running (candidates) think about our child future,” she said, while expressing concerns over constraints parents endure to educate their kids and the challenges kids experience as well.

“So, it’s about time that we campaign to vote right and vote people who are thinking about our children’s health and education. If God gives us the good leader, I know our children will benefit because our time is finished now,” she said.

Over 100 women from across Bopolu City attended the ANC political rally on August 5, 2017

Momo N. Kanneh, who spoke on behalf of the five communities within Bopolu City, also urged his kinsmen to understand the message of the ANC and prepare to “vote well tomorrow.”

“This activity is part of the 2017 electoral process so let us not think about today but our children future,” he said.

Junior Kolleh, who spoke on behalf of the physically challenged community, said they “Will always turn out to the call of any politician to enable us to be informed about their various platforms and help us make informed-decision on October 10″.

Later, ANC Gbarpolu County chairman, Morris Johnson who led the campaign rally, said the party is seeking “for real change for the people of Liberia”.

Johnson said “real change” must come because people in the county have suffered for 12 years under the current government.

He warned his partisans against “cash driven politicians”, saying: “Do not look at money; nobody can run election without money.”

“The ANC, under the leadership of Alexander B. Cummings, is pushing to address women and youth empowerment, good roads, health, education among others basic needs of the Liberian people,” he said.