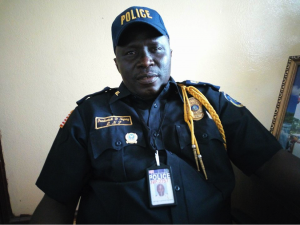 Panta District – Moses Porkpah, a man accused of allegedly killing his girlfriend in Zota District, Bong County has been arrested by a group of citizens after being on the run for more than six weeks.

Porkpah reportedly murdered Dorris Nyan, 29, on June 1, 2017, and fled to the bush, and had ever since eluded arrest by the police and the community.

But almost 10 weeks later, on August 19 locals of Gbarngasiaquelleh in Panta District arrested the suspected murderer when he was spotted purchasing some food items.

Fedrick Nepay, the county police superintendent, lauded the community for the “effective citizens policing” to apprehend a “threat to the security of the people”.

Napay said suspect Porkpah has been transferred to Monrovia for detention and will be brought back to Bong to stand trial.

The Bong County police chief told a local radio station that the suspect was posing “security threats” to the people of Cow Farm and its environs.

While on the run two weeks after the incident, fugitive Porkpah also shoot two persons.

The two victims, Junior Andrews and Amos Nusiah, were among traditional hunters from surrounding towns and villages aiding police to arrest Porkpah.

One of the injured victims’ leg was amputated at Phebe Hospital in Bong County, where he was rushed for medical treatment, while the other is currently in the Republic of Guinea undergoing traditional medical treatment, according to family members.

The cause of Porkpah’s alleged action has not been established, however, there are two separate narratives by family sources and community dwellers respectively about what triggered his alleged action.

One account says the suspect’s action was a result of a misunderstanding between he and his deceased girlfriend concerning her ex-relationship. Another asserts his action was because the deceased refused to give him sufficient food.