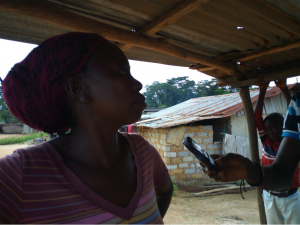 Bong County – Despite the National Elections Commission recruiting hundreds of voter educators and hiring several civil society organizations to carry out civic voter education (CVE) across the country, rural communities in Bong County are complaining about the slow pace of the process.

NEC recruited and deployed 436 civic voter educators and 290 gender mobilizers to carry out door-to-door and face-to-face interactions with community dwellers in the central Liberian county.

Over 90 civil society organizations are also supported by UNDP, USAID, EU, International Foundation for Election System (IFES) and the National Democratic Institute (NDI) to assist NEC with the CVE process.

The CVE campaign sensitizes voters about their civic responsibilities and roles in the elections process.

Peter S. Gantawolo, a youth of the town, says many people lack knowledge about the voting process

But people in Gboata, electoral district three, continue to alarm over the slow pace of the process.The town, which had a voter registration center, is dubbed a ‘vote-rich’ community in that district – most of those registered are youth or first-time voters

The town, which had a voter registration center, is dubbed a ‘vote-rich’ community in that district – most of those registered are youth or first-time voters

Tomkollie Paye, the general town chief, told LocalVoicesLiberia many people in the area lack knowledge about the voting process.

“Since the voter registration some of us have not heard any information from them (NEC),” he said in the Kpelleh language.

“After the registration period, they packed their bags and left and nothing has been heard from the National Elections Commission as it relates to processes leading to the elections.”

Some youth in the town also expressed disappointment in the CVE, asserting that since the official launch of the campaign on August 18 in Gbarnga City, campaigners have failed to cover certain parts of the county.

“We are pretty scared that there would be massive errors by the electorate from here if nothing is done to fast-track increased awareness on the civic and voter education campaign in this town,” said Peter S. Gantawolo.

Yamah Kollie says NEC must fast track the civic voter education so that many people in the town can have an understanding about the voting process, or else there might be many invalid votes

Jefferson B. Flomo: Many citizens might not be a part of the democratic process.

Jefferson B. Flomo and Yamah Kollie are afraid that if CVE campaign is not fast track in the area it would deprive many citizens the right to be a part of the country’s democratic process.

They said first-time voters, who are dominating the voting population of the town, are not knowledgeable enough about national elections and might make “serious mistakes” when marking the ballot papers.

Newland also said the commission was conducting training for its workers in Gbarnga and will shortly resolve the prevailing situations in rural communities.

“We just got through training our CVE campaigners and will soon be in those rural communities outside of Gbarnga in order to ensure [that] our people make informed decisions during these critical elections,” he said.