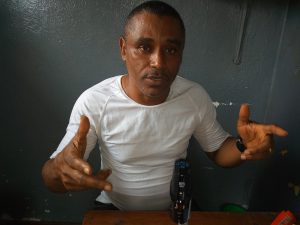 When the officers apprehended him, he refused to be investigated, claiming that he had the firearm to protect himself in the community, said Major Taggidine.

He has, however, been turned over to the Liberian National Police for further investigation.

“Moses was in that district threatening people with the arm and claiming that he had it for self-defense,” Taggidine said.

“It is criminal to have small arm without the approval of authorities in Liberia and we must report anyone committing such act.”

“This upcoming election is very critical and we as citizens need to help the securities in hosting a peaceful election by reporting evildoers,” he said, adding that every citizen needs to help in maintaining the peace.

” Let me tell you, citizens, no security officer will disclose who give them information but you the citizens have to keep informing us so that we can maintain the peace “, Taggidine said.

Meanwhile, Alvin Garjay, a resident of Buchanan, said the government should take the blame for the illegal possession of firearms.

“How did this man get the arm,” Garjay asked. “This means that our country is not safe because anyone can just walk into this country with gun. If that man was going to do bad to anyone in this area then we were going to hold them responsible.”