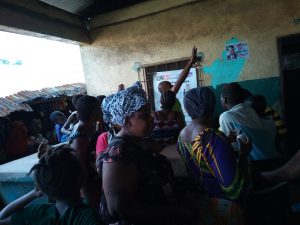 The district debates in Maryland County featured a total of 12 representative candidates from the three electoral districts. Seventeen candidates failed to attend despite invitations from the organizers.

The town hall debates are sponsor by Internews Liberia under its Liberia media development program with funding from the United States Agency for International Development (USAID).

Describing the event, Raymond Zarbay, a Liberian journalist working on the debate team, said the platform gave voters the opportunity to interact with people seeking public office in the county.

Zarbay said it was important for people to listen to the platforms and promises of their representative candidates so that “if elected, they will be able to hold them accountable on promises made during debates and campaigns”.

The first representative debate kicked off in electoral district one on September 2 at the Harper City Hall when an audience of over 900 people listened to six candidates debate key issues affecting the constituency.

It brought together three candidates in the first session from different political parties.

Later in the afternoon, Nyekapool Swen, Josephine Y. Allison and P. Mark Jury also debated in front of an audience that was also keen to ask questions drawn from thematic issues affecting the district.

In electoral district two, the debate was held in the Pleabo City Hall on September 4 with over 1,000 live audience members eager to hear the candidates’ respective messages.

Important Issues were highlighted during the District Two debate amongst them were “eradicating ritualistic killings, youth empowerment, and land ownership”.

It was no show in district three as candidates fail to attend, which left constituents expressing disappointments in the candidates for failing to attend the event. Some asserted, “Those seeking election in the district have no interest in its people”.