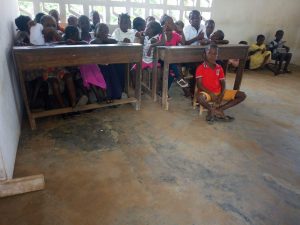 Charlie Town, Rivercess County – Since the start of the 2017/18 academic year, pupils of the Charlie Town Public School have not begun classes due to lack of teachers.

Charlie town is located in Timbo district – the oldest district in Rivercess County – 25 kilometers from Cestos city. Constructed in 2002 by the Catholic Relief service, the school currently has 185 students.

Since the beginning of this school year, pupils that are often seen dressed in their uniforms going to school, return home complaining to their parents “there are no teachers.”

Benjamin Geeko, the school’s principal, told LocalVoicesLiberia over the weekend that like the lack of teachers the school faces numerous challenges.

“Learning is not taking place in this school because one teacher cannot teach a school,” Geeko said. “When I came in this school, I met one government paid teacher and a volunteer, so we were three here, but the government transferred the other teachers from here.”

He said several complaints to the education authorities in the county have yielded no positive results.

“And the parents have told us they will take their children from the school if nothing is done. I have been encouraging the children and their parents to be patient as I continue to call for teachers,” he said. “But what I see, the children will surely leave if we continue like this.”

“But from what I see, the children will surely leave if we continue like this.”

Students sitting in class on a school day at the Charlie Town Public School on September 2, 2017(Photo above). Many of them go to school but do not have a teacher to attend to them

Some parents told LocalVoicesLiberia they will not participate in the October 10 elections if nothing is done to address the current situation at the school.

“There is no need we vote because standing under the sun and rain is for nothing,” complains George Cee, the Parent-Teachers Association Chairman. “The problem has been in this school since 2011 and we have been voting and nothing can change. Last year ourselves were paying two volunteer teachers, but this year, things are not easy.”

He added that the school also lacks safe drinking water, latrine, and seats and said, “some of the children are asked to carry their own seats to school.”

Martha Grant, a resident of Zeo Town, said her children’s education is most important to her “and not to make someone and their families rich.”

“Instead of wasting my time on voting business, I better be looking for where I will send my children to go to school,” she said of her discontent in participating in the October 10 polls.

Artcoston Dorgbein, the acting CEO, said he has been aware of the situation and has since informed the Ministry of Education.

“We have called on the ministry to place teachers in those schools, but this has been delayed by the ministry, ” Dorgbein said, adding that the challenges associated with recruiting of teachers are not unique to Rivercess county.

According to Dorgbein, 50 teachers who didn’t have the requisite qualification were removed from the payroll in December 2016.

“From last year our schools have been empty and when I confronted the General Service Agency, they blamed it on the bad road conditions,” Dorgbein said.

River Cess County Senator Dallas Gueh, who served as County Education Officer before his election in 2011 to the Liberian Senate and served as Chairman on the Senate committee on education, has come under fire from locals for allegedly failing to alleviate some of the numerous challenges facing the county’s school sector.