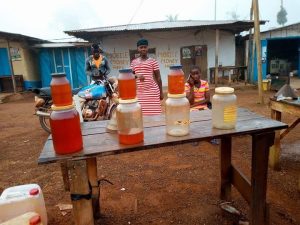 River Gee County – People in River Gee County are expressing concerns that the delay in the conduct of the run-off presidential election is worsening the already dwindling local economy.

They are calling on the Supreme Court of Liberia to speedily handle the case raised by Liberty Party in order to alleviate the economic hardship in the county.

Their call comes due to the hike in the prices of two essential commodities in less than a week after the Supreme Court placed a stay order on all campaign activities for the run-off elections.

The high court said until hearings are conducted into the LP’s allegations of election irregularities and fraud against the NEC, all elections activities should be put on hold.

And the election impasse has already affected the prices of rice and gasoline. A 25-kilogram bag of rice previously sold for LD$2,000LD is now for $2,800 while a gallon of gasoline, which was sold for LD$450, is now sold for LD$800.

Glass jars use to manually measure gasoline are neatly placed on a table in Fish Town, River Gee County

Locals in the county are panicking that the ongoing situation might lead to extreme artificial scarcity of essential commodities.

With almost 90% increment in the price of a gallon of gasoline, only few vehicles and motorbikes are seen plying the streets.

“It is not only the increment in price that is the problem, but we are afraid that we could also experience shortage during this crucial time,” said Emmanuel team leader of women Alert, a community-based organization.

“The increment in [prices of] these commodities will pose hardship to marketers, students, and other community members.  The fare [charged] for distances has changed [increased]. Distances that cost $300LD are now $600LD.”

Many motorbikes owners have parked their bikes complaining that they are spending more money on gasoline and spare parts without realizing profits.

David Doboyou, the regional coordinator of the motorcyclists union, told his membership of commercial bikers during a meeting at his office that his leadership is working to find a solution to the problem.

“I see that most of the motorcyclists are out of job and spend their time hanging around the union’s office daily,” Doboyou said. “I am discussing with the leadership of the gas sellers association on the price reduction.”

“Although the road between Ganta to Fishtown is bad, gas is sold in Zwedru for LD$400, while rice is sold for LD$2100, so I do not know why the vendors decided to raise the price of these goods,” Wrotuh said. “We are supposed to help our customers to get goods at the right price and not to exploit them.”

He continued: “Increasing price without genuine reason is against our standards. I have initiated discussions with members of the business community in River Gee on how to find a way to remedy the situation.”