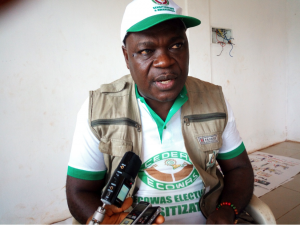 The message was echoed on November 6 during a one-day peace sensitization activities for young people in Buchanan City.

The stakes have been high as the Supreme Court heard the alleged irregularities and fraud case filed by the Liberty Party against the National Election Commission over the results of the first round of voting on October 10.

Many Liberians have emphasized the need to exercise tolerance during the legal process.

Benedict Roberts of ECOWAS Liberia’s office told LocalVoicesLiberia on November 6, in Buchanan during the event that young people are “key players in maintaining the peace Liberians are enjoying”.

He said if Liberia is to move forward, maintaining peace should be a major focus of all citizens, most especially young people.

“Today we have come to Grand Bassa County to host a peace tournament among you the young people because we want you to spread the message of peace everywhere you go on a daily basis,” Roberts said before the start of the event held at the Doris Williams Sports Stadium.

“Liberia is at a critical point as it relates to the runoff election and Liberia can only remain stable when all Liberians put their feet to the fire and spread the message of peace and non-violence.”

He reminded young participants that they would continue enjoying peace for many years by avoiding violence and preaching messages of peace to maintain it.

“We are here for peace so we want you to serve as an ambassador for peace in your communities and schools,” the ECOWAS official said.

Responding to the regional body’s call for peace in the country, Victor Joe, the head of Grand Bassa County motorcyclists union, said motorcyclist are prepared to serve as ambassadors of peace while transporting passengers.

“We the motorcyclists have been described as people of violence but we are going to prove it to ECOWAS and the world that we are hustlers and not rude people,” said Joe in an interview with LVL.

“I will spread the message to all the riders that whenever they are on the traffic they should help tell their passengers about peace.”

Students of various institutions thanked ECOWAS and its partners for sensitizing them about the critical role they as students have to play in the election process.

Assatu Jalloh of the Seventh Day Adventist School in Buchanan assured that students would work with their respective administrations to revive peace clubs in their schools.

Jalloh, who spoke on behalf of students during the one-day tournament, said rejuvenating peace clubs would ensure messages of peace are spread to students during school hours.

“My fellow colleagues let us put pressure on our Principals for peace clubs to be active now because this is the time for us to spread the message of peace,” she stressed.