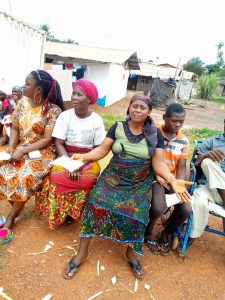 River Gee County – Since the Liberty Party’s move to halt the presidential runoff election leading to a stay order on all election activities by the Supreme Court of Liberia, people in River Gee County anxiously awaited the court’s verdict.

But when the court referred the case back to the National Elections Commission to look into the LP’s allegations of “Election irregularities and fraud,” many locals became disappointed in the trend the case was taking.

They blame the election impasse for creating economic hardship and uncertainties.

Local businesses have been significantly affected by prices of major commodities that continuous to skyrocket. Earning livelihood is becoming a huge challenge for many local people.

A vocal Maratha Weah (third from left), the president of cross-border women in River Gee County, says they are becoming impatient due to the ongoing elections case

Amongst those feeling the brunt of the ongoing election, stalemate is the Cross-Border Trade Women that heavily rely on commercial activities between Liberia and neighboring counties like the Republic of Guinea in the north and Ivory Coast in the east of the county.

These women travel across countries in the West African sub-region to conduct trade and commercial activities, returned to Liberia with their merchandise and rely on local purchasing power to keep their businesses afloat.

“[The] Elections Commission must remember that people have schedules to follow. The commission is responsible for all this delay. We want to vote and move on to do our businesses,” said a disappointed Maratha Weah, the president of cross-border women in River Gee County.

“Even if the border is open how can we travel out of the country when we do not know when the new voting date will be or what will be the outcome of this case?”

River Gee County borders the Republic of Ivory Coast on the East of Liberia and major commodities such as rice comes to this part of Liberia through the border.

Other commodities like pepper, onions, garlic, cosmetics, and slippers even enter Liberia through the same route.

With the election keeping the borders closed as the legal wrangling over the authenticity of the first round continues, the matter is being made worse for these cross-border traders.

“If we stay too long out of business we will not be able to accumulate profit to pay our loan. I really want this election to go on peacefully so we can resume our business,” said Bendy Kenneth, a cross-border trader.

She added: “With the stiff economic atmosphere in the county right now, how long can a single mother who needs to pay her rent, children tuition, buy medication and food for her kids wait? In times like these waiting can be like a watched pot that never boils.”

Women lined up in a queue in Fish Town, River Gee County on October 10, 2017, during the first round of voting in Liberia’s presidential and representative elections

The female turned out in the recent October 10 elections surpassed the total of both 2005 and 2011 general elections. Some of the polling places record shows female turnouts were neck-to-neck with their male counterpart while others show women were more.

This shows that many women’s interest in the election has significantly improved, the NEC official in the county said.

But as concerns over the delays of concluding the electoral process looms, these traders are becoming impatient and see the legal hauling as impediments to their source of livelihood.

“Nevertheless, we want the women and all the people of River Gee to continue to hold their confidence in the elections commission and remain law-abiding as the commission handles the case,” said magistrate Synyenlentue.