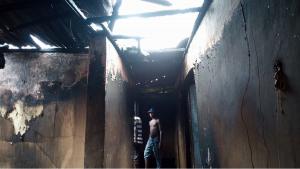 Fanga, an associate magistrate at the Kakata city court, lived in the Fourteen Road community where the incident occurred.

The three bedroom apartment of Amos Fanga in the Fourteen Road Community, Kakata City left in ashes on Monday, November 13, 2017, due to the untraceable fire incident

According to an eyewitness, Vivian Bonard, the fire started in one of the rooms about 11:00 AM when all the occupants of the building were either at work or school.

Bonard said when she began smelling the burnt scent of clothes; she was concerned, glanced into the house and noticed fire had erupted in bedrooms.

“When I saw the fire, I started shouting for people to come and help and that’s how we burst the door but could not retrieve anything because of the intensity of the fire,” she said.

Judge Fanga later told reporters he was “short of words” and could not explain his ordeal. Shock after losing everything in the apartment including some of his essential documents.

“The only thing I am left with was the clothes I wore from the house to work, I am confused and don’t know where to start from,” he said.

Kakata city has experienced at least two major unexplained fire incidents that caused the destruction of properties worth thousands of United States dollars.

In April this year, a four-bedroom building housing the offices of a local Christian health charity group, Healthy Women Healthy Liberia was gutted by fire, leaving several assorted items and the building in ashes.

Also, in October 2016, Radio Kakata FM 104.6 MHz, one of the nine community radio stations operating in Margibi County, was also destroyed including all its studio equipment.

The police are still unable to establish any trace of these major fire incidents that many in the county suspect to be “arsons attacks”.

Margibi County: NEC Completes Training On The Use of Tactile Ballot
US Based Christian Charity Seeks Support For Ebola Orphans