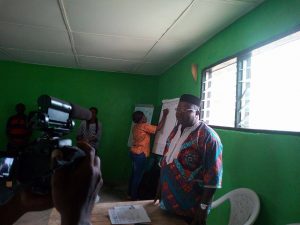 Gbarpolu County – People in Gbarpolu County are becoming anxious about the trend the ongoing legal tussle into the election between the Liberty Party and the National Elections Commissions (NEC) is taking.

Expressing their dismay and concern on a local community radio – Voice of Kpo, they expressed fear about a potential constitutional crisis if the legal proceedings are not concluded within the electoral time limit.

“Up to present, because of the elections case, we are not able to elect our president and vice president. We are afraid of going into constitutional crisis during this delay of 2017 election,” said Stephen Kollie, an official of the county civil society organization.

Alvin Yah of Henry town in Bopolu district added: “This is the first time we are experiencing this kind of election case in our country. We just need to keep engaging our leaders for information about the whole election business”.

Many people in the county are calling on the local authority and NEC to keep informing the public about matters relating to the electoral process and the ongoing litigation about the election.

“For me, since we did not go to the runoff on November 7, I just want our big-big people (authorities) and the election workers (NEC) to be giving us information on this radio every day about the case,” said Tokpa Mulbah, a resident of Weasua Town in Gbarma district.

Gbarpolu County Superintendent Armah M. Sarnor is calling on people of the county to remain peaceful and patient as the legal process reaches the Supreme Court of Liberia

Responding to the locals’ concerns, county Superintendent Armah M. Sarnor urged them to continue “exercising patience until the legal squabble is resolved.”

He made the statement at a one-day land ownership and governance forum held on November 20, in Bopolu City.

Sarnor said legal proceedings into the election impasse would have a lasting positive impact on the country’s democratic system once it is legally concluded.

“What is happening with Liberty Party and NEC is good for our democracy,” he said. “So we will just give them the chance to so least when it is resolved, and when we go to have the election, we can have it in peace.”

He said when elections are conducted free of violence and produced the legitimate president who takes office in 2018 thereafter “development can follow”.

Kollie Lamendine, NEC magistrate in Gbarpolu County, refused to comment on the conduct of electoral activities until the court process is fully exhausted.

“Since the Supreme Court placed a stay order on our activities, I remain silent until we can be given the go ahead with elections activities – so for now let the people of Gbarpolu keep engaging their leaders and politicians”, Lamendine told LocalVoicesLiberia.

A potential run-off between opposition Coalition of Democratic Change and the ruling Unity Party is being delayed due to ongoing legal action by Liberty Party against results of the first round of voting announced by the National Elections Commission.

Liberty Party has accused the NEC of elections “irregularities and fraud”. This has ignited mix views and debate about a potential eruption of violence in the country.

Following two ruling against its arguments by the NEC hearing officer and Board of Commissioners, LP has taken its case to the Supreme Court, where a final ruling into the case is expected to be made in seven days.