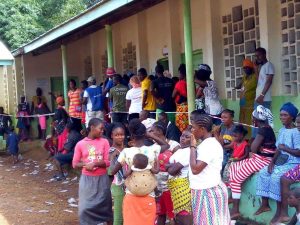 Buchanan – Several women in Grand Bassa County have expressed concerns over the political future of female politicians in the county.

They cited the poor showing of female candidates in the October 10 poll due to insistent challenges as an example of uncertainties that are leading to a gloomy political future for female politicians.

Women lined up in queues to cast their votes on polling day, October 10, 2017 at a school in Buchanan, Grand Bassa County

Lack of financial resources and deplorable roads were some serious constraints female candidates faced during political campaigns leading to the first round of voting.

Also, there are increasing assertions that the declining support of female voters towards female candidates is a major obstacle.

She added that the lack of support is fueled by envy and hate perceived by some women against female politicians.

Kangar, a long time women advocate who also contested the county’s senatorial seat in 2011 and lost to a male candidate, wants female voters to rally their support for female candidates during elections.

“We as women should trust our fellow women first before the men can come in, but if any of our colleagues are contesting we envy them and feel that only men can make the difference, we must stop this,” she said.

She continued: “More women couldn’t have won because women refused to support their friends but if the huge numbers of women that registered during the election process could have voted in favor of women, then more women who have won with the help of few men”.

Elizabeth Barwon, a losing representative candidate for Buchanan district in the 2017 elections, agrees.

“Most of us women hit each other and allow money to be our only obstacles, which these male contestants use during elections,” Barwon told LocalVoicesLiberia.

The National Election Commission voters’ roster shows that 145,798 persons registered in the five electoral districts in the county, out of which 73,774 are males and 72,024 are females.

For some women below the political echelon in the county, contesting for a political seat is also about having financial and manipulative muscles to lure the necessary support.

“These men have the money, so whenever they entered a town or village, they spent plenty money on the young people and spoiled their minds that woman are not able to represent them at the legislature,” says Angeline Crusoe, a marketer in Buchanan city.

She said most female candidates who contested the October 10 poll stood slim chances of outperforming their male counterparts, who had better financial advantages.

Crusoe added that most female candidates struggled on their campaign trail and were unable to reach major towns and villages due to deplorable road condition.

“You have to walk two to three hours before getting there, women were not able to walk those distances,” she said.

She also expressed disappointment that women in the county failed to support female candidates due to perceived “envy”.

“In my district two females contested but they didn’t win because some of them didn’t have enough money,” she said.

“More besides, they went into the race late and couldn’t reach all over the major parts of the districts.”

For Cyrus Toclo, a male resident of electoral district one, female candidates performed poorly in the elections because they failed to forge a “formidable political team”.

“If these women were together, they would have joined their colleagues instead of being two to three female contesting in one district,” he said.

He argues that most women who contested had little intention of winning but they sought to generate money from international organizations that promote female politicians across the world.

A total of eight female candidates contested the five electoral districts in Grand Bassa County, with only incumbent candidate, Mary Karwor, emerging as the single female winner in the heavily contested poll.

Some observers claimed Representative Karwor bid for a second term was successful because of the incumbency factor.

They say her advantages sprung from the implementation of several development projects in the district by using personal, public and legislative funds.