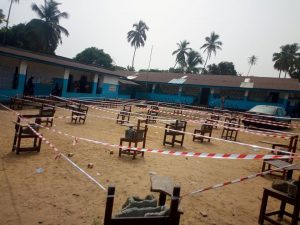 Buchanan City – People in Grand Bassa County have blamed the cause of the poor turnout of voters during Tuesday runoff presidential election on the date set for voting.

A runoff election set for December 26 – a day after Christmas Day – by the National Election Commission left much concern about its impact on the turnout.

As feared by many, low voters’ turnout was well noticed as precincts were empty or few people showing up to participate as compared to the first round.

Samuel David, a resident of Buchanan City, told LocalVoicesLiberia that it was difficult for more voters to turn out for the election because they spent their time out during the night of Christmas.

“Most of the voters could not come because they went to nightclubs on December 25, 2017, a day before the election and they were tired to wake up,” he asserted.

David said he had also planned not to participate in the poll until a friend convinced him that the polling station was empty.

“I was walking my friend on the road when I saw all the polling centers empty, so I decided to just go vote and encourage others to go and vote but some refused to listen,” he said.

Marie Klehn said many voters didn’t turn out because they had no interest in either of the candidates.

“Some of my friends told me that they didn’t vote because their candidates were not part of the election and they didn’t like any of the two candidates,” she said.

She said it was disappointing when she saw almost all of the polling centers empty.

Polling centers in Grand Bassa County were poorly attended beginning the morning hour up to the closing hours as voters walked into the polling places one at a time.

A physically challenged poll worker inks a voters finger as part of the voting process at the Unification Pavilion voting precincts in Buchanan, City on Tuesday, December 26, 2017 | Photo By: Elton Wrionbee Tiah

Meanwhile, people living with disabilities in the county have praised the NEC for hiring some of them to serve as poll workers.

Peter Jimmy, Head of the group of 77 in the county, told LocalVoicesLiberia that he was very happy when his colleague served as ballot box controller.

“I saw my friends in a wheelchair putting ink on my hands and telling me where to put the ballot paper, I was very, very happy,” he said.

“At least we can now feel that we are human beings too because people only take us to be beggars that can’t do anything for ourselves which is false”.

Jimmy added that if every other institution in Liberia allows physically challenge to occupy one or two spaces in their offices, there will be less number of disabled people begging.

“I am really praying that this new government will think about empowering us because we are part of the Country,” he said.

He added that the 2017 runoff election is going to serve as history in the lives of people living with disabilities in Grand Bassa County.

“Everything was easy for us this election, when we go vote, the people can allow us to vote quick, then see our friend who is sitting in a wheelchair working for NEC, I am happy,” he said.