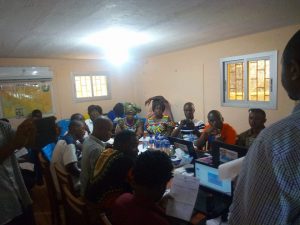 Members of Local Voices Liberia Media Network attending the workshop on how to report about the CSDF and LSP at the offices of Internews on Friday, January 26, 2017, / Photo by Tiah

Twenty-one community radio reporters from across all 15 counties gathered in Monrovia for the training, which focused on improving their skills to report about the usage of the County Social Development Funds (CSDF) and the implementation of Legislative Special Projects (LSP).

The training began Thursday, January 25 and ended on the January 26.

Tawedzegwa Musitini, Deputy Chief of Party for Internews, implementer of the Liberia Media Development (LMD) program funded by USAID, encouraged journalists to report about the usage of the CSDF in various counties.

He said LMD is committed to improving journalists’ skills on the importance of monitoring and reporting about the CSDFs.

” Please take this training seriously because it will help all of you on reporting quality stories,” Mr. Musitini said.

Samuka V. Konneh, a facilitator at the training, said USAID is supporting Internews to implement a two-year project on Liberia Media Budget Monitoring for Accountability.

“This training will enable you to encourage public participation in the planning, use, and oversight of social development funds at the sub-national level,” Konneh said.

“The training is aimed at building the capacity of you journalists to report on the CDFs”.

Following the training, Moses Geply, a reporter of Local Voices Liberia based in Grand Gedeh County, said the training has broadened his skills on how to report about the CDF in his county.

“Most of our reports don’t focus on the CDFs but politics,” Geply said. “From this training, I have the hope that we as journalists mostly especially from the rural areas are going to be in the forefront reporting these issues.”

Fatu Boley and Angeline Roberts, reporters of Local Voices Liberia based in Bong and Grand Gedeh Counties respectively, said there are lots of issues concerning the use of CDFs for which journalists need to report.

“We are very sure that after this training, we as journalists will do more investigations and reporting on the CDFs in our counties”, Boley said.

Added Roberts, who is based in Zwedru, Grand Gedeh County: “We are hopeful that at the end of the training we as female journalists working in the counties, we are going to dig deeper and report about the issues that are associated with how the county money is spent on projects.”