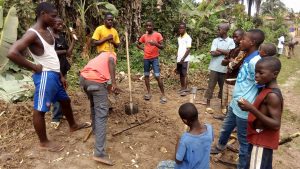 Zwedru – Residents of New Georgia Community in Zwedru, Grand Gedeh County have begun using their bare hands to manually rehabilitate a major road connecting their community with central Zwedru and the Palace of Corrections.

On February 3, groups of youths, children, and women were seen with hoes, shovels, and cutlasses clearing the road.

New Georgia community began to expand in the early 2016 and currently host a cross session of Liberians.

Doe Street, which connects the community with the city center, was a major street used to transport prisoners to the Palace of Corrections, but its present condition prevents the transport of convicts through on that route.

Moses Dorbor, the community chairman, said the project is a self-help initiative that began as a result of failures of the local authority to reconstruct the road.

“Could you imagine, the local authority of Grand Gedeh promised us to help the community with tools but failed to fulfill their promises,” he said.

“For this reason, we have been constrained to help ourselves because we were really looking up to our government for this work but they let us down.”

He said the absence of a road has caused a lot of embarrassments for the community including students and motorcyclists that ply the road during the rainy season.

“Currently, we are using our neighbors’ yard as a street to bring in our goods and other materials for our homes, something which on so many occasions have caused confusion between motorcyclists and our neighbors,” he said.

Mr. Dorbor, meanwhile, stressed that the country can be developed under President Weah’s regime when people take on self-help initiatives in their respective communities.

“Liberia cannot be developed in the absence of Liberians taking self-developments initiative or responsibility,” he said.

Meanwhile, Dorothy Quaiwea, chairlady of New Georgia community, praised the community dwellers for the willingness to work and connect the community with central Zwedru and other parts of the city.

“Now, at least we are free with this road issue, we can now come in easy without passing in another person yard,” she said.

“This community is new, so we have to hold together as one family that’s the only way we can be on par with other developing communities in Zwedru,” said Quaiwea.

She also called on the new government to prioritize road connectivity in order to improve the lives of rural Liberians.

” This road is our own road, therefore, our today’s works mean that we can undertake any developmental works without support from the government,” added Washington Toe, acting youth president for the community.

According to Washington, the Unity Party government especially Grand Gedeh County local authority failed to meet the developments agenda of the county.

A civil society actor in the county, Harley Mahn, lauded the efforts of the community for the “good undertaken”.

“Let me use opportunity on behalf of the CSOs in Grand Gedeh to thank the leaders of this community for organizing your people to open this road on your own,” he said. “This gesture is worth appreciation.”

He then lashed at the administration of former county superintendent Peter L. Solo for not attending to the plight of the community before his tenure expired.

Several students who joined the initiative said the rehabilitation of the road would ease their worries during the rainy season.

“Today, I’m very happy to see myself with my parents working on this bad road,” said Archie Segbae, a student of Faith International School system.