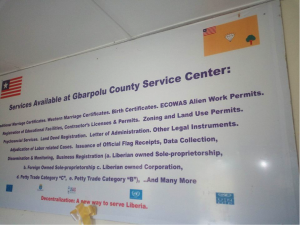 Bopolu County – The head of the Gbarpolu County Services Center, Owen Kolleh, is asking donors and the Government of Liberia for funding to create more awareness about services available at the center in Bopolu City.

Speaking to LocalVoicesLiberia in Bopulo, Mr. Kolleh said since the service center open to the public on 8 February 2017 as part of the Liberia Decentralization Development Program (LDSP), the center has not received operational funds as was promised by the government.

He said service centers in Grand Bassa and other counties usually receive quarterly operational funds to enhance supervision in the respective counties.

The Gbarpolu County service center coordinator said the center has received one Yamaha motorbike from the Ministry of Internal Affairs for its work.

According to him, due to the lack of operational funds, citizens in the six administrative districts of the county are not adequately informed about the activities of the center.

He, however, encouraged citizens in the county to take advantage of the services available at the center.

He named traditional marriage certificate, school registration, and business registration as some of the services offered at the center.

“We are not able to reach out and create awareness of the many services available here, so we are not getting more people turning out for services”, Mr. Kolleh said.

“1,226 people have received varies services since we started operation last year at the center.”