Grand Bassa County: Mother of Seven Living By the Mercy of Her Fishing Hook 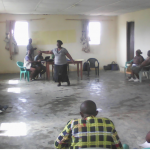 Buchanan – Thirty-six year old Victoria Karr, a mother of seven children, relies on artisanal fishing as the only source of livelihood for her family.

She’s often seen with her kids along the river in Paynesberry – the main route leading to the Grand Bassa Community College.

Since the start of the rainy season, Victoria carries her young baby on her back while fishing in the river.

She tells Local Voices Liberia that since the father of her kids left them, he’s yet to return and his whereabouts is unknown. It’s a heavy burden to carry alone so she has turned to selling fish after catching them from the rivers within the proximity of the port city of Buchanan.

Out of her seven children, only one of them is currently in school.

“These children father left them with me and I heard that he traveled but I don’t know where he traveled,” she said, noting that she has ever since turned to fishing as a means of fetching food, clothing and medication for the kids.

“I have more than 3 children and I can (have to) fishing before feeding the three I have with me,” she said.

“Sometimes when the dry season comes, I can help the government school to cook before my children get food.”

Like Victoria, several other women and children are also seen fishing in the Benson River. Some of them appear to be at risk due to the high tides of the river during the rainy season.

In recent years, several men and children have died in the river as a result of drowning.

However, during the rainy season Victoria’s focus turns to the Benson River, using fishing hooks and nets to fishing. Her daily catch is sometimes of good quantity to make it to the market.

But catering to seven children is a herculean task for a woman with little skill, even though her artisanal fishing activities turn out rewarding some days.

“I had three children with me that I was feeding but all the other ones just came back to me and I am now responsible for them too. I don’t have anyone to help me but God is the only person I depend on for help,” she said faintly, narrating how relatives had to send back her children to her due to the current economic hardship they are facing too.

“If I had someone good to help me take care of my children I will be happy because most of them are not going to school and I want them to learn,” she said.

Victoria’s pleas to citizens and government officials have not been yield fruit so far, so she’s taking her problems into her own hands by focusing on what does best – fishing.

“I’m tired begging people to help me with my children, whole day some of them can be telling me all kinds of things and so I’m fighting on my own to help them,” she said.