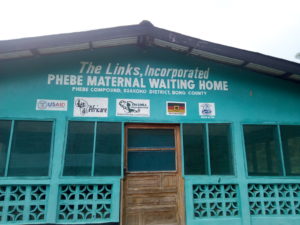 Bong County – Phebe Maternal Waiting home, located in Suakoko District, Bong County, is in dire strait as midwives decry that the facility is short on supplies needed to keep it functional.

The home was built by international NGO Africare in March 2013 and it is basically intended to curb maternal deaths in the county by giving pregnant women a chance to be closer to the hospital before giving birth.

Speaking to reporters during a recent visit to the facility, the resident midwife Madam Viola K. Makor called on philanthropic organizations and well-meaning citizens as well as governmental entities to buttress their efforts in providing the necessary materials needed for the smooth operation of the facility.

The facility is short on food, drugs and other essential supplies, she said.

She added that pregnant women are usually admitted at the home during their eighth month. They are taken in from surrounding villages for antenatal treatment and delivery at the hospital.

Makor said because pregnant women live far away from health centers, they are usually constrained to give birth under unsafe condition which is a primary cause of maternal deaths in the county.

She also attributed bad road network and unavailability of ambulance in most parts of the country as other causes of maternal mortality.

She added that since the establishment of the maternal waiting home, it has received over 685 patients. Two persons have had cesarean session and needed extra care.

“Food is one of the major challenges we are facing here. I make cassava farm; make garden just to get something to eat, because some of them come without food at the maternal home,” she said.

Sangai Jallah, a resident of Grand Gedeh County, said she has suffered unsafe delivery before which caused her serious health condition.

She was warned by health practitioners to stay at the maternal waiting home whenever she gets pregnant.

“Any time I feel small pain they can check me to see what went wrong; the services offer at this maternal waiting home making plenty big bella to not die when giving birth,” she said.

While many pregnant women in the area are relying on the waiting home to prevent complications during delivery, the lack of basic supplies is now posing more threats to significance of the facility, which might undermine the objective of setting up the home.