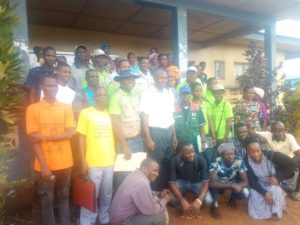 Report By: Henry B. Gboluma Jr

Gbarpolu County – A forest inventory to identify animals and plants species that are located in the county have began in Gbarpolu County and it is expected to run for 20 days.

On July 31, the Forestry Development Authority officially launched the National Forestry Inventory (NFI) in the county. The project is supported by the government of Norway through the World Bank.

He said what makes Liberia great among the whole of West Africa is because of the way Liberians continued to manage their forest.

According to him, the inventory will enable Liberia get first-hand information on what they have in their forest reserved.

“Liberia has never experienced this since 1964, [that was] the last time the German old mission conducted an inventory in Liberia,” he said of the last inventory conducted more five decades ago.

He added that the purpose of engaging the citizens is because they are the custodian of the land and they know better about the forest, and it was important for them to participate in the project.

“A hunter must be among them to identify trees in their dialect. You might even have some of your children writing the name of all the trees around Bopolu here in Kpelle; we can even start teaching our children’s children tomorrow so that they will know too,” he told the locals.

Conducting the official launch of the project, the special assistant to the county Superintendent J. Keyah Saah Forkap Karmon described the exercise as a national initiative and assured the commitment of the people of Gbarpolu.

“They have made numerous clarifications on questions and concerns that were raised. They are only here to check what we have – the quantity of what we have in terms of animals and plants. So, we want to assure you that the FDA family, that we will be supportive of your mission,” Karmon said.

There were several positive views coming from community dwellers about the forest inventory, with some considering the process as a means of strengthening the county.

“If we maintain our forest I want to believe that, it will be one of the pillows that will strengthen the developmental aspect of our country, mama Liberia,” said Musa Sediby, a member of the Bopolu District Youth Accountability Forum.

For her part, Mary Gayflor, a women leader added, “In this program, you should not forget about the women. Even going into the forest to check for the tree, the women should take part.”

Alexander Quaqua believes that the county depends on its forest, so he wants the FDA to be “truthful and do proactive disclosure” to the community after the inventory exercise.

“What you will see in our forest come and tell us the fair truth. And tell us what the cost is and benefits, then which of course, our blessings will be behind you,” he said.

There are 52 gender sensitive foresters divided into six teams carrying out the NFI in 31 forest-plots throughout the six administrative districts in Gbarpolu.

Closed to one hundred youth, women and local authorities plus government ministries and agencies attended the launch of the project in Bopolu City.