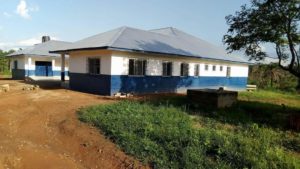 Lofa County – Moses Fayiah Momolu, the acting District Health officer of Foya statutory district, is calling on the government to provide regular supply of drugs to the new health center in order to enhance its smooth operations.

Momolu also wants government to provide an ambulance for the health center as well as other medical equipment and qualified medical staff to cater to the health needs of the people of the district.

In an interview with LocalVoicesLiberia recently, the DHO disclosed that the newly built Foya community health center will be supervised for 10 years by the Catholic Mission.

The new facility, he said, was created by members of the county Legislative caucus, including Senator Stephen Zargo and the deceased Foya District Representative Eugene Fallah Kparkar.

The health center is named in honor of the late lawmaker, Eugene Fallah Kparkar, who represented the district at the Capitol throughout the scourge of the Ebola virus outbreak.

The Catholic mission has come to run and elevate the community health center from a clinic to a hospital status, Momolu told LocalVoicesLiberia.

According to him, the turning over ceremony of the health center to the Catholic mission has been done and the organization began 24 hours operations since June 5.

Lofa County has an estimated 88,600 people whose medical needs cannot be cater for by a single referral hospital.

And Momolu said the Foya Burma Hospital, which is the only referral hospital in the district, has only one functional ambulance responsible to transport pregnant women and other patients, and the hospital has just two medical doctors.