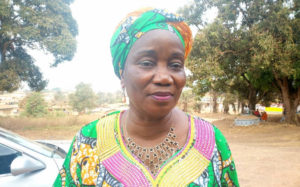 Gbarnga -Two road building equipment purchased to rehabilitate existing roads and open new ones in Gbarnga and other parts of Bong County have been covered in overgrown grass for two years because the county failed to maintain them.

In 2012, Bong’s leadership negotiated a US$662,300 deal with a vendor to procure a front end loader, a motor grader, and a dump truck to rehabilitate existing roads and open new ones in the county the money was taken from the County and Social Development Fund.

The vendor was paid upfront $634,300 for the front end loader and the motor grader; with a balance of $28,000 remaining to complete payment for the dump truck. The county is yet to pay the vendor his balance to take delivery of the truck.

The front end loader currently sits at the Gbarnga Administration Building, while the motor grader is sitting in Cole’s Village in Suakoko District, in the county.

Darkamue Kollie, a health worker and resident of Gbarnga, said motorists have to practice defensive driving on Gbarnga streets because the roads are dangerous. There are too many pot holes.

“I am still waiting for someone to show me a street that was ever laid out by the machines that were bought in this county,’’ Kollie said. “All I know is that streets were opened, machines did some patrols, but I don’t even call that opening streets.

Roads are impassable during rainy season:

Many of the city’s streets are damaged and impassable during the rainy season.  Some of those streets include the Collins Street road that leads from Chief Compound to Gbarnga at the Far East Junction; People’s Street, GSA Road and the Kokoyah Road.

Anthony Sherrif, Bong County’s assistant superintendent for development, said the county will get a mechanic to assess the machines and determine the cost for repairing them.

“Last year we allotted US$15,000 to repair the machines, but that money was used to do some road works in Gbarnga,” Sheriff said.

Lincoln Kpanato, a commercial motorcyclist and a resident of Zowienta in Bong’s First District, said it is challenging transporting passengers on the bad roads.

“When we are riding on the roads and encounter vehicles from the opposite side, we need to stop and park the motorcycles off the road to enable the car to pass,’’ he said.

Kpanato urged local county officials to find a way to repair the machines, so the roads can be fixed.

“We are just asking them to help us recondition some of these roads because if they don’t do that now, most of the roads will be cut off before the end of this rainy season,” he said.

Dakemue Kollie suggests that if the county cannot afford to fix the machines, they should scrap the equipment and sell them and then use the proceeds to hire a contractor to fix the roads.

Superintendent Esther Walker says there is no money to refurbish her official residence / Photo: Moses Bailey

In addition to the road equipment, the county has abandoned two generators, the superintendent’s residence and a vehicle.

The county spent $35,000 for the pickup truck that as assigned to Weleteh Flomo, former superintendent of Kokoyah District. The pickup has two flat tires and has been parked in the Kokoyah community for six years.

In December 2013, former President Ellen Johnson Sirleaf suspended Flomo for allegedly mismanaging US$60,000 meant for development in Kokoyah. He was later charged and found guilty of the offense at the Ninth Judicial Circuit in Gbarnga.

Flomo threatened to appeal to the Supreme Court and has so far not repaid the $60,000, according to former Superintendent Selena Polson Mappy.

Superintendent Esther Walker, who was appointed by President George Weah in February, said she took over a county “with all the accounts in red.”

Walker said she has not moved into the superintendent residence because the building is dilapidated and needs to be renovated.

“I can’t go in there now, ‘’ she said. “The county does not have money to do repairs on the building.’’

Bong County was allotted $175,666 in the 2018/2019 national budget. Walker said she plans to use some of that money to fix the equipment and renovate superintendent’s residence.

In 2009, the county spent US$150,000 from the CSDF to buy two generators (110 KVA and 250 KVA) to power Gbarnga streetlights as part of projects for that year’s Independence Day celebration. The generators were only used when President Sirleaf visited Gbarnga for events.

County officials said they do not use the generators because they cannot afford to fuel them, leaving the city in darkness.

Aaron Juaquellie, the national program officer for the Foundation for International Dignity (FIND), has called on Walker to commission an audit of the county’s funds to understand why the county is broke.

Without an audit, citizens will have no understanding of how county funds were spent. Bong’s last county sitting to determine CSDF project was held in 2015.

“Let the new leadership of the county conduct an internal audit and display to the public on what they received,’’ Juaquellie said. ‘’In the absence of an audit, I can’t believe what they are telling us.’’

He said it’s a shame that the county cannot account for how it’s spending public funds.

The county’s leadership will meet to decide what to do about the road building equipment and other unfinished projects in the county, said Rep. Prince Moye (District Two, Unity Party).

“The leadership of the county will need to meet and decide on what to do, ‘’ Moye said.” No single leader can do that.’’

Senator Henry Yallah, the chairperson of the Bong County Legislative Caucus said the county has to complete the unfinished projects before allotting money for new ones.

Yallah said he has asked Sheriff, the assistant superintendent for development, for a report on the status of all CSDF projects.

“It will be the wise thing to do, to complete those ones if there will be any other county sitting,” Yallah said.

In addition, the county administration needs to answer questions regarding the superintendent’s residence and the generators. The county administered those assets, and so they should account for them, Yallah said.

“It is the county administrators that should answer to those things,’’ he said. ‘’They are the ones executing projects, they are managing the machines.’’

Responding to questions about why Bong has not had a county sitting since 2015, Yallah said    MFDP’s failure to remit CSDF money to the county is the major reason for not having a county sitting.

However, Yallah’s claim and that of Superintendent Walker runs contrary to what former Superintendent Selena Polson Mappy stated in her turnover note prepared by the Project Management Committee.