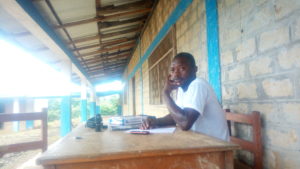 The school shut down during the -2017/2018 activities at the end of the 2016/2017 school year when the Principal, Kenneth Lawoda – who was the only government employed staff at the school – was allowed by the county school system to go on study leave.

This prompted community members to have expressed disappointment in county school system.

Since then, the PTA members have been engaging and finding ways to have their school reopen.  The school PTA boss, Boimah Quaqua, said “I pray to God that everything is getting fine. This few times I called a community meeting and they came up and we brushed the area [school campus].”

He said they notified the principal through a written letter about progress made toward the school ahead of the 2018/2019 school year. According to him, the principal was not on campus. Through the PTA action, the Principal is on the campus now.

The PTA boss said, “so, I am still calling for the parents to bring their children them in, registration is going on now.”

“I have only one teacher, who is the principal, I am appealing to the government to bring in some teachers,” Mr. Quaqua said.

For his part, the youth leader of Lower Bombom Clan in Goungbiayah Chiefdom, Roland Branch said the government is not helping the school which resulted to the closure of the school and most of the children taking advantage of farming activities.

He said, “We have children in our communities but no teacher. We just started the registration, the principal started registration.”

He described the Varmah Town Elementary Public school as “one of the finest schools building” in Gbarpolu County.  He wants the Ministry of Education to urgently send teachers to the school. “That is the only way our children, who are the feature leaders will be educated to lead this country tomorrow,” Mr. Branch said.

He is also appealing to the community people to send their children for registration. “Without education, this nation cannot go forward,” the Goungbiayah Chiefdom, youth leader, Roland Branch said.

Meanwhile, the principal of the school, Kenneth Lawonda said he started registration on September 4, 2018, at the request of the PTA after their cleaning up exercise on campus for the current school year.

According to him, 24 students have registered. He put the low turnout to the low population of the seven communities that are depending on the school for their children education. He said but, “maybe the number could have been more than that because I was in school during my exam. He, however, said, “But now that I have come and made [an] announcement, people are coming one by one.”

Kenneth is the only teacher in the school which he described as national issues.  “Liberia as a whole, the interior part, normally that is the situation.”

But Principal is still a student of Straz Technical and Vocational College in Sinje – Grand Cape Mount County perusing his AA degree. “I completed my course, so I am going to be regularly, so I am encouraging them to send their children to school.”

He sees the PTA action which resulted in the reopening of the school as the story of Jesus in the Bible.

“……when Jesus died, he resurrected.  That is the reason that he said I am coming back, and he gives us the glory. So, I believed that since this school has been resurrected again if they [students] come in numbers, I believed that DEO, CEO plus me, we will work in the way that this school will be effective than before,” Mr. Lawonda said

The Varmah Town Public Elementary was constructed in 2005 by the Liberia Agency for Community Empowerment (LACE) at the cost of US$69,379.83 with funding from the government.

According to the 2016/2017 school enrollment obtained from the district education officer, the school had 129 students – 79 boys and 50 girls.