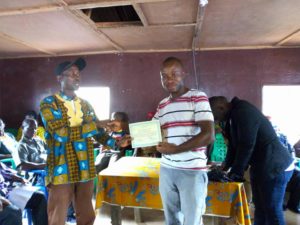 Gbarma District – The Guljah Youth for Transformation in collaboration with the Gbarma District Youth Across Border have publicly recognized and honored Henry B. Gboluma, Jr. as an ‘Outstanding and Diligent Media Practitioner’ of Gbarpolu County.

Gboluma says the award has “reawakened my spirit for this job I so desire.”

The groups, in their award statement, said: “History will forever remain unkind to our conscious if your monumental life serving and communities rebuilding go unnoticed, unrecognized and unrewarded.”

“It is against this significant and unavoidable invaluable services to Gbarma and Gbarpolu that we have decided to publicly honor you as an “outstanding and diligent Media practitioner of our county.”

The award, according to the groups, will serve as motivation for Gboluma and will encourage him to double his energy in doing more for his county, region, and the country at large through meaningful information sharing via social media as well as print, online website (s) and digital media

Gboluma is a founding member of Local Voices Liberia Media Network, a group of Liberian journalists working in the countries 15 counties. The network is committed to reporting stories that are largely under-reported by major mainstream media outlets. The network uses its website and social media platforms as well as partner radio stations across the country to disseminate stories about local communities.

Since the founding of the network, Gboluma has reported on several developmental issues impacting Gbarpolu County. Some of his stories have focused on the health, education and development challenges of people in the county.

Henry is the Director of programs at the Voice of Kpo in Gbarpolu County, where he is informing the public on diverse social issues to enable them make informed choices.

He has a good history of working for some reputable National and International organizations – such as Child Fund and the Youth in Action for the Prevention of HIV & AIDS as Kongba District Health Officer and Community Health Services Supervisor respectively.

After receiving the award, he told reporters that “these youth institutions have reawakened my spirit for this job I so desire. They have pushed me to keep lifting the local voices in this country.”

He dedicated his award to the team of reporters of the network and other journalists working in rural Liberia.

A certificate of appreciation was awarded to the Voice of Kpo 92.5 Fm for implementing the Ebola Community Action Platform-2 in partnership with Mercy Corps Liberia in 2016.