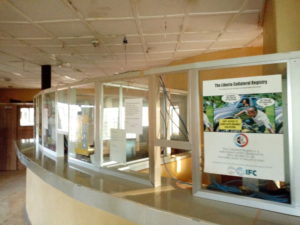 Bopolu City, Gbarpolu – The MC2 Gbarpolu County community Bank was robbed on Tuesday night October 23, 2018, in Bopolu city by some notorious criminals, making away with millions of Liberians dollars.
According to the only security guard of the bank, Beyan V. Sirleaf, when the incident occurred, the robbers packed their vehicle in front of the bank, got down and walked to him and said they had a breakdown so they were waiting for a mechanic to help them.
While they were sitting and lecturing, according to the watchman, the guys offered him Chinese Attayea, but he told them he could only drink Bush Attayea. So, one of the criminals asked him to take him to the tea shop so he could buy some for them to drink. He said, when they left, the other guys carried on the operation while the other guy held him for long lecturing at the attayea shop.
While away, the other criminals opened the iron doors and started hauling the money in their car.
When they were done, they went to the attayea shop and asked the watchman to go to his post. When he got there, according to him, he met the door opened and to his surprise, he saw one man coming out with the last bag of money. He said the man instantly dropped the bag and hit him in the eye with a fist and escaped.
The watchman then alarmed, drawing the attention of two Correction Officers on guard at the prison, which is meters away from the bank’s premises.
He informed them that guys were still in the Bank. So, they only focus on guarding the area than chasing the criminals that ran away. But later, they noticed that there was no one in the bank.
They called the checkpoint near Bopolu City but it was late because they told them that the robbers had passed 20 minutes ago.
They left a red bag behind that has one hard saw, two drill machines one, one wheel ring and 150 keys.
According to the police fact findings, they kept trying the keys to establish how the suspects got inside the vault. Two of the keys were master keys, which apparently opened all the doors from the gate to the last door leading to the vault inside the Bank.
The vault lock was reportedly spoiled before the incident took place, according to sources at the bank.

Through their investigation, they observed that the robbers left the amount of L$2,515,595 plus US$237.00.
The bank manager, Samulu Konneh disclosed that on Thursday, they used the Police Support Unit (PSU) pick up to bring into the county L$9,000,000.00. That amount was to pay government workers salary.
He said they will disclose the total amount that was in the bank as of October 23, 2018.
Meanwhile, the management of the bank said they have closed all transactions as of Wednesday, October 24, 2018 due to the incident, announcing that they will resume work on Monday, October 30, 2018.