Gbarpolu County: Gov’t turns over 4-Bedroom Units to the Teachers 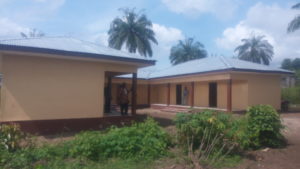 The turning over event was done at the end of the Minister’s two-day appreciation visit to the county. Minister Sirleaf was in Gbarpolu from October 24 -25, 2018 to thank citizens for a democratic transition and the election of President George Weah.

Superintendent J. Keyah Saah said county-based teachers are not marking much salary like those in the urban area as a result, the county decided to construct teachers’ quarter to help narrow some constraints facing teachers in the county with funding from the County and Social Development Funds (CSDF).

Thirty-five thousand United States dollars was allotted to the said project accounting to source from a member of the PMC of Gbarpolu.

He said to his boss, “Minister Sirleaf, I am pleased to inform you that this teachers’ resident was built as the result of allotment that citizens of Gbarpolu made in county sitting to address some of the difficulties facing our teachers, so on behave of the citizens I hereby gave you these keys for you to official turnover.”

The Liberia Internal Affairs boss said, “This is what supports the decentralization program because these kinds of activities help to attract good [well] qualified teachers in rural Liberia. It helps to give quality education to our children.”

“From the county development funds, they have constructed four bedrooms, a modern structure that will help to support the teachers, this is not all. This is just the beginning. This is what the pro-poor agenda stand for, the rent aspect is been taken care of.”

According to him, the teachers’ resident will have a positive effect on the teaching system. He then urged students to put their time in getting the best out of their teachers.

“These developments affect your learning process so, you have to put yourself in the position to study so that you can become good future leaders of our country,” he said.

He then pledged the CDC-led government support to the sustainability of the county development funds through the national budget of Liberia.

While receiving the keys on behafe of the county education officer, the principal of the Bopolu Elementary School, Stanford Massaquoi said: “We highly appreciate your kind gesture.”

He used the event and asked the Internal Affairs to get involved in the assignment of teachers in the country.

Massaquoi pointed out that “in the Gbarpolu county school system, there are a lot of teachers on the government payroll, that have left the classrooms,” noting that “it is not good for the school system”.

For his part, the president of the Bopolu Central High student council, Benjamin Zubah added that “Some teachers came here last year, they went back due to the lack of housing. So I just want to say thank you for the dedication of this building.”