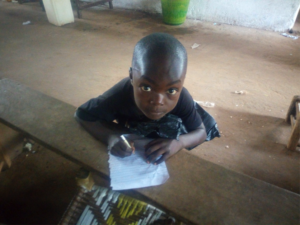 A pupil struggles to practice hand writing at a public school in Buchanan, Grand Bassa County

Students are normally seen using their laps as a desk at the Sarah Sampson George School, Kpelle Town Public School, Gorzohn Community School and several other public schools across the city.

Martha Potter, Principal of the Sarah Sampson George School, told LocalVoicesLiberia that all the classes are without chairs. She said students share seat meant for one person while others bring armless chairs purchased by parents who can afford it.

“These small chairs you’re seeing here were purchased by the parents themselves. Sometimes I feel shame as principal seeing our schools like this,” she said.

“We have spoken to the Ministry of Education to help our schools but up to present, we have heard nothing from them. If I had money I could have helped improve the educational system in this county by providing chairs for the students to sit on”.

“I have an office, but no chair and table, so I sit among these kids,” she said, adding that several other public schools and are also facing the same problem.

Annie sumo, a parent whose child attends the Kpelle town Public school, expressed disappointment over the lack of support for government schools in the county.

“Every year we cry for the lack of chairs and other needed support for the school but nothing can be done. I am tired of their plenty big book [promises],” Madam Sumo added.

James Kollie, another parent who has a son at the Sarah Sampson George School, says their kids are facing difficulties because many of them are jobless.

“If I had a good job my children would have gone to the same School the government officials’ children are attending. They don’t care because their children don’t feel the pains our children feel at the government schools”, Kollie said.

He suggests that during the upcoming county sittings the county should allocate money to purchase chairs to help needed schools instead of waiting for the national government to intervene.

“Every county sitting we only talk about building more schools but we don’t think about the sitting capacities for students. I want to use this medium to call on delegates that will be attending this year’s County Council Sitting to talk about furniture’s for schools and not buildings only,” he said.

A teacher of a public school in the county, who asked not to be named, said although the school lacks furniture, the government recently supplied stationery. He’s afraid that the stationery will not be used properly if the students are sitting on broken stools without arms that should aid their writing practices.

For his part, the county education officer of Grand Bassa County, Nathaniel Cisco, confirmed that public schools in the county are challenged with seating capacity.

Cisco, who recently took over as CEO, added that he toured the schools and plans to submit a report to the Ministry of Education.