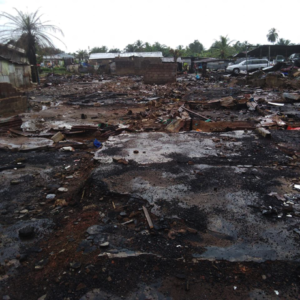 Monrovia – Victims of a fire incident on 14th Street, Sinkor are pleading with government and humanitarian organizations to come to their aid.

Although there are conflicting reports about the source of the fire, no human casualty was recorded. Authorities of the community have put the number of persons devastated by the fire at nearly 150 persons.

Already, about 80 victims, including women and children are being temporarily sheltered at video clubs, churchyards, and neighbor homes. The fire victims have expressed disappointment in the government for not making immediate humanitarian intervention since the incident occurred nearly two weeks ago.

The Chairman of the community, Moses F. Williams said since two staffers from the office of Montserrado district # 9 lawmaker, Representative Munah Pelham-Youngblood visited the area on a fact finding mission, they have not returned.

“We have not received anybody, including our district lawmaker. On Wednesday evening, I received two staff members from the Honorable Munah Pelham-Youngblood’s office, and told me that the representative suppose to be with us here but she’s attending an urgent meeting. They said she would be here on Thursday, but since then we have not seen her. I don’t want to pre-empt”, the chairman told reporters.

Chairman Williams said most of the affected residents have not found decent place to stay, saying, “Most of the people are staying in the video clubs, in the churchyard, they don’t have shelter. Unfortunately, whenever the video club owner wants to run his show, the people are waited outside until sometimes 1am or 2am before going to bed”.

About 80 victims, including women and children are being temporarily sheltered at video clubs, churchyards, and neighbor homes

Esther Barlay, 25, a mother of four children says she sleeps in the video club along with her kids and husband.

“Everything I had left in the fire. I don’t even have a mattress to sleep on. We managed to lay our heads on the mattress of our friends in the video club”, Esther explains.

When asked how she manages with life outside her home, another woman, Ruth Mango, a mother of five, she relies on her neighbors’ cooking utensils to cook.

“We are about 80 persons in the video club. Life in the video club is embarrassing. Just imagine I have to beg for people’s pot before I cook. We’re asking the government to ruling come to our aid,” said Ruth, who was aggrieved by the situation.

Blessing, 16, says, “We have no choice. Anytime the people show finish we can go to bed. I want the government to help us build new house for us”.

Two kids, only identified as Moses and Reuben, age 10 and 6 respective, are appealing to the government to help them.

Meanwhile, a humanitarian organization, “Miracle For The Homeless” Foundation during the week presented some food items to the fire victims.

The foundation, founded by Madam Miracle Gbayee, a Liberian residing in the United States of America, donated 40 bags of 25kg rice, oil and other food items.

The group puts the cost of the items and other associated services at US$1,700 (one thousand seven hundred United States dollars).

Speaking during a brief ceremony at the weekend, the Executive Director Varney Paye Saiwhean said the Chief Patron of the organization was touched by the fire incident, adding that the foundation had earlier planned to identify with the people of New Kru Town, but shifted its plan to the 14th Street’s situation due to its emergency nature.

“We planned series of activities for this year and this one was never part of it. Our last event was to take place in New Kru Town, but because of this fire incident, we decided to suspend that one to focus here”, Varney told the fire victims.

Varney further disclosed that “Miracle For The Homeless” Foundation has embarked on the construction of a home on the Robertsfield highway for the purpose of sheltering people made homeless by natural or human disaster.

He said everything the group is involved with is being financed by Madam Miracle Gbayee, its founder.

“Everything we’re doing here is supported by Miracle Gbayee. She takes portion of her earnings to identify with people in need. As we speak to you we have purchased a piece of land and construction of a home has begun. That home will only be used to keep people like you there for some time until you reestablish yourself,” he said.