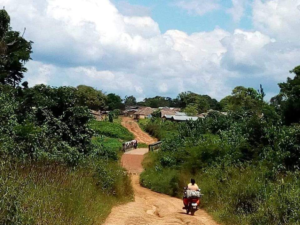 Morlakwelleh Town (pictured above) is one of three mining communities demanding answers about US$22,000 intended for them

Gbarpolu County – Some residents of three mining communities in Bokomu and Gou-Nwolailai Districts are demanding details from a sum of money a Chinese Mining Company, Linpool gave the communities some years ago.

According to the residents, the government had fined the Chinese Mining Company for illegal mining.

Two of the communities, Dorkorta and Kpanta are located in Gou Nwolailai District while Molarkwelleh Town is located in Bokomu District. These are communities in Gbarpolu electoral District Two.

Alice Zinnah, a female resident of Dorkorta community, alleges that the money in question is US$22,000.

According to her, “since the local authorities got the money from the Chinese mining company in 2013 up to this year, they have not talked to us, this is too bad from our leaders.”

Zinnah said the money was given to implement projects in the three communities affected by the company’s mining activities. But the development associations in the two districts are in possession of the money and have failed to make report.
“Today, we’re asking the government that we the citizens need that money to develop this area,” said Alex Y. Zinnah.

James N. Borlay a resident of Dorkorta added, “we want that money to be in action but not to be kept it continuously.”

For William Yarsiah of Kpanta, he alleges that the money for road development is being used for the building of a guesthouse as well as paying volunteers teachers in their communities.

Anthony D. Sumo, town chief of Morlakwelleh town, explained, “according to our district association chairman’s, he said the money was 20,000 but since 2012 up to this time there has been no head and tile about that money.”

“Sometimes we called a meeting, [but] they cannot come to clarify to us. This mining money business we all have to stand strong to know where the money is now.”
Meanwhile, the Gou Nwolailai District Development Association Chairman, Alex Kpuway alleged that the deal with the Chinese company was verbal agreement with the affected communities.

“Then we as development association, got involved because since this earth was founded by God, it was the first time for us to see an equipment called Dredge, to be placed on Tuma water for mining,” Kpuway said.

According to him, based on concerns about the operations of the Chinese company, the affected communities filed a lawsuit against the firm and were due to receive some damages.

“They sued the company and at the end got US$20,000 from the company as compensation for the affected communities. We have not eaten this money,” he said, while suggesting to the three towns to come together and come up with a plan to make proper claim for the money.