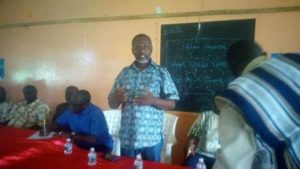 They are squarely putting the blame on the failure of the county to hold its development sitting due to persistent disunity amongst the county’s lawmakers.

The last time Gbarpolu held a development sitting was August 2016. It is now three fiscal years and the county is yet to conduct another sitting. The sitting is the gateway to access development funds from the national government.

“The problem is from our caucus – when the caucus is not together nothing can come to your county,” claimed Theresa Gbarnga, Gbarma Statutory District Inspector.

“I can be listening to [the] radio and hearing people talking about county sitting but not with Gbarpolu.”

“We are feeling bad about our lawmakers. We want them to say something about our county sitting,” adds Jerry Smith of electoral District Three.

George Kerman of Forkpa Town in Bokomu district says although the county authority completed the construction of a US$45,000 clinic building in their town, access to healthcare is still a challenge for residents.

“If the nurses or doctors do not diagnose our treatment, how will we know the type of treatment we need? We’re just forced to do it [buy from black bags doctors] because the clinic building alone is useless,” says Forkpa.

Another resident of Bokomu town, Jerry Y. sumo argues, “Because our leaders are not in our interest, so whatsoever they promised, they have failed us.” For Alice Zinnah of Guo Nwolalai District, even the clinics that are under construction will not be useful if they are not completely equipped and staffed.

A member of the county CSO, Stephen Kollie of Bopolu district then called on the county leadership to attach “seriousness” in order to fast-track the completion of existing CSDF projects.

US$71,000.00 Incomplete Clinic in Normordator town, Kongba District as the result of the current persistent disunity amongst caucus members of Gbarpolu

For his part, the town Chief of Morlakwelleh, Anthony D. Sumo, disclosed that the contractor of the clinic is still holding onto the keys because the county authority has not paid his balance money.

Yangar Gbargbar, women leader of Belle Yealla, stressed the importance of a finished clinic, adding that it will help cater to old people who are seeking treatment.

Senator Daniel Flomo Naatehn on October 27, 2018, recently confirmed that there exists disunity amongst caucus members of the county.

“Since I when back (to the Senate) in 2015, I cannot remember the Gbarpolu legislative caucus meeting more than one time. The one time we went to meet, it was in my office,” he explained.

Although the women and elders of the county promised to settle the dispute, it was a son of the county – Minister of State for Presidential Affairs, Nathaniel F. McGill – who recently organized an ‘All Gbarpolu Citizens’ meeting on November 11, 2018, in Monrovia.

Over 200 persons from the county attended the meeting including four out of the five lawmakers. They included Senators Armah Z. Jallah and Daniel F. Naatehn and Representatives Joseph Matthew and Kaine A. Wesso

During the meeting, people from the county urged the lawmakers to organize themselves in the best interest of the county.

And the lawmakers then pledged to settle their difference very soon.

Also during the meeting, the chair of the county Project Management Committee, Sam K. Zinnah disclosed that for the past three years and through the county resolutions from past settings, they initiated the construction of seven clinics amongst other projects.

According to him, half of the money has been paid to the contractors to enable them achieved some millstone.

“Those people have performed and now there is no money in the account to pay those people for the work they have done,” he said.

Currently, the county has a little over US$1.4 million in its development fund at the Finance Ministry, Zinnah said, while pointing out that projects will not be completed if the money is not transfer in the county’s account and called for the caucus to push for disbursement of the money to the county.

“We can move to the Finance Ministry. If the caucus goes there, of course, the Minister is going to sit with the caucus and discuss,” he said.

Note: this story was first published by FrontPageAfrica (https://frontpageafricaonline.com/county-news/liberia-gbarpolu-county-residents-worry-over-non-functional-incomplete-development-projects/)