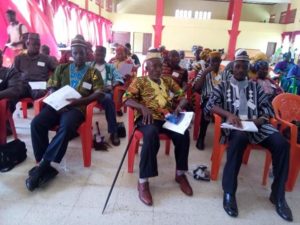 Gbarnga – The National Traditional Council of Chiefs and Elders of Liberia has promised to prevent the opening of Poro and Sande bushes during the school year, while also assuring that no new bushes will be open in the country.

The traditional council made the commitment during a one-day event in Gbarnga, Bong County where officials of the Ministry of Internal Affairs and UN Women were also in attendance.

The event also held a consultative session intended to end all forms of violence against women. It also included the lunch of an inventory of traditional leaders and society bushes in the country.

It was held under the theme: “Ensuring compliance to end all form of violence against women and girls in Liberia.”

Chief Zanzan Karwor, head of the council, warned all Zoes and chiefs across the country not to open new Sande bush in their various counties. He said the inventory is intended to cross-examine the continuous opening of Sande bushes in the country.

Chief Karwor said any chief or Zoe who will violate the regulation under his watch as head of traditional chiefs will be dealt with according to the rules of tradition.

“Your please carrying this message to all our friends to stop violating the rights of girl children; let sent them to school so that they can be good people in [the] society,” the head of the National Traditional Council said.

He added that it has been observed that some unscrupulous individuals in the various counties are in constant habit of opening traditional groves all over in the country.

The inventory will be conducted in three of Liberia 15 counties: Grand Bassa, Lofa and Gbarpolo Counties.

Also speaking at the occasion, UN Women Country Representative to Liberia, Marie Goreth-Nizigame said the UN is passionate about ensuring that women and girls are protected from all forms of violence and that they are not subjected to cultural norms and practices that affect their development.

“We remain steadfast in ensuring that traditional leaders are supported and worked with to bring Liberia on par with other global nations who have abolished harmful practices that hamper the growth and development of women and girls,” she said.

Madam Goreth-Nizigame encouraged traditional leaders in the country to prioritize education, empowerment, health and the well being of every female as they too are the pillars of the home and the society.

The UN Women Country Representative further said they respect and appreciate the culture and traditions of Liberia and would want to see its best practices upheld.

The UN Women boss, at the same time, said the fight to end all forms of violence against women and girls cannot be won without their powerful allies, which she noted as the “traditional Fathers and Mothers”.

She said chiefs and elders are the custodians of the Liberian culture, customs, traditions and values and they are very influential in convincing their community members to accept or adopt new ways, approaches, behaviours and attitudes that protect women and girls from violence.

“All of us are part of a global village where modernization and technology are slowly taking over our cultural and traditional values and practices. Traditional leaders need to be prepared for the changes and modernization of our culture, and think critically on how they can preserve the positive aspects of our culture so that it is not lost,” she stressed.

At the end of the one interactive dialogue participants lauded UN Women and other organizations attending for the knowledge acquired and they promised to implement what they learned.