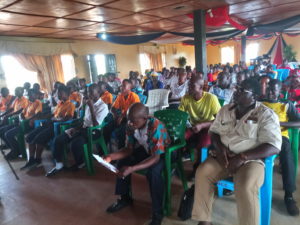 Bopolu City – Over one hundred Liberians have shown support for a new health care financing plan, which suggests that citizens start contributing to the payment of their health services at government-run health facilities across the country.

They gave their separate support during a community media forum (CMF) held in Bopolu city hall ON November 29.

Local Voices Media Network organized the CMF with support from Internews under its Liberia Media Development program funded by USAID.

The forum engages citizens living outside of Monrovia on development issues and allows them to discuss Liberia’s development challenges and offer new solutions to national issues.

Gbarpolu County’s CMF focused on Health Care Financing. It was the second of a three-part series; the first was held in Zozor City, Lofa County and discussed Decentralization.

In Bopolu city, locals showed support for the plan and called on the government to initiate a drug revolving system in order to have sustainable health care financing in the country.

Panellists were drawn from the health sector, women group, disable community and civil society to give their respective views on the new plan

During the CMF, five panellists representing the health sector, civil society, rural women group, and disabled community, shared their individual thoughts with the 50 males and 64 females audience chosen from diverse sectors of the society in the county.

Isaac G. Bannie, the administrator of Chief Jallah Lone Hospital – the main referral health facility in the county, served as a panellist.

He said health care financing is a very serious matter that is important to every Liberian while lauding the purpose of the forum.
“It’s not somebody sitting in Washington DC; it’s not somebody sitting in the capital city and taking the voices of the people. What we doing here today, will surely, sure that every one of us, have participated in something that is intended for everyone,” he said.

“Today, when you look at our surrounding, you can no longer see those NGOs, they are gone, leaving the health sector vulnerable.”

Bannie said free health care service is not working because people are paying for drug indirectly.

“The nurses cannot make magic to make a treatment to treat you. When there is a good hospital, there will be healthy people in Gbarpolu County,” added Bendu Jah, president of the rural women of Gbarpolu, Bendu, who was also on the panel.

Elise Samah, a representative of the civil society of Gbarpolu, stressed that paying for medications at government health facilities “cannot be a problem for us as citizens.”

Samah added: “if we continue to say free, you will still try and buy it [drug] outside, so we need to put our resources together for us to get the proper treatment.”

While sharing his views as a panellist, the child survival focal person of the Gbarpolu County health team, Jusu Kpanah told the audience that they are paying for their treatment indirectly, adding “Now, why can we put
ourselves together and start paying.”

Maima Korpo, former head of the disabled union in the county, said “the government has done her own but it is not sufficient, so as citizens of this county, parents of the children, we need to fight hard to see means how we will be able to get drugs on our own to support our children.”

Kutuku Sheriff, a teacher of the Bopolu Central High who was in the audience, suggested that citizens’ start paying for their own medications as a means of complementing government and donor’s support.

Several others also urged the government to initiate a revolving health care system where citizens will be asked to pay an affordable amount for their proper medications at public health facilities across the country.