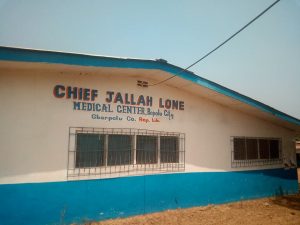 Written by Henry B. Gboluma

Some prominent citizens of Gbarpolu County have donated over 600 gallons of fuel to help bridge the fuel shortage at the major referral hospital in the county.

The Chief Jallah Lone Medical Center (CJLMC) continues to face a series of constraints due to the delay and restriction on the disbursement of money allotted to the hospital by the government.

Up to the present, some of these challenges remain unresolved. For instance, the hospital ran out of fuel for two weeks at the end of December 2018 and early January this year. Operation of ambulances and emergencies cases were all halted.

The deaths of three persons were reported allegedly on LBS.  This provoked a two-day peaceful protest by the women, who were seen on major streets of Bopolu City demanding instant support to the hospital. They, however, rallied 24 gallons of fuel as their contribution toward addressing the problem.

The Peaceful protest by the women

In response to the protestors, some citizens of the county also provided fuel to bring back the electricity at the hospital.

Presenting the fuel to the hospital’s administrator Mr. Isaac G. Bannie, during one of the fuel presentation events, Superintendent J. Keyah Saah said, “due to the shortage of fuel at our hospital that even resulted to the lost of lives which claimed our mothers’ attention, today, in response to your cries; I hereby present 70 gallons fuel oil in my own name, and also, announced that we have got some fuel to bring back the lost hope to patients at the hospital and citizens of Gbarpolu.”

He said that a mining company, MNG Gold in Gbarpolu also donated 30 gallons. He added that an additional 100 gallons of fuel were sent by Gbarpolu District one Representative Alfred G. Koiwood.

He thanked those who contributed to the restoration of electricity and as well as the citizens for being peaceful. He urged the hospital administration to be proactive in their operations.

Receiving the fuel, Mr. Bannie said that the support will enhance the work of the hospital.

“Because we never had fuel for two weeks, work here was at the standstill. So, thank God that our nurses and Doctors will be back on their feet to keep saving lives.”

Jonny Barclay, a resident of Bopolu City added: “Today we thank God that small light is there. We hope that the government will do more.”

Majority of the ordinary people who spoke to Local Voices Liberia called on the government to prioritize the disbursement of money allotted for healthcare.