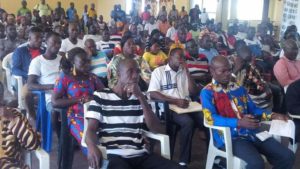 Harper, Maryland County – A mass meeting intended to mitigate a conflict which erupted after the alleged murder of a motorcyclist has ended in Maryland County.

Liberia’s Internal Affairs Minister, Hon. Varney A. Sirleaf, who attended the gathering held on January 31, 2019, called on the people of the county to avoid reoccurrence.

The meeting was also attended by members of the religious community, women groups, elders, youths, civil society organizations, and the motorcyclists union.

The meeting ended a three-day angry protest led by some aggrieved motorcyclists over the death of their colleague, whose body was discovered outside Harper City.

Medical report shows that the deceased had a deep cut in his head.

The protest disrupted normal activities in the city, including the movement of health workers, students and teachers with schools forced to shut down.

The protesters stormed the local police station, demanding that the police expedite the investigate

During the mitigating gathering, Maryland County Superintendent George A. Proud said he had invited the Minister Sirleaf to intervene into the crisis.

Proud said he was informed on January 27 by police about the alleged murder of the 26-year-old motorcyclist, identified as Bill O. Myers – a student of the William V.S Tubman University.

Said Superintendent Proud: “Hon. Minister, the local authorities of Maryland County condemned and regret such ugly act that has the propensity of painting Maryland County black to the outside world and as such we are doing everything humanly possible to bring the perpetrators to book.”

Proud said he instructed the police to investigate, but was shocked to see residents protesting.

“Hon. Minister, could you imagine, this demonstration by the protestors have lasted for three days, and those protestors even broke in the premises of the Liberia National Police Women Children Division, destroying documents and taking away some computers,” explains Hon. Proud during the meeting.

“Hon. Minister, the action by the protestors have placed us in the position to do a communication to the central office for timely intervention. But I will be unfair despite the involvement of some women if I don’t appreciate the mothers of Maryland County who have broken the storm and quiet down the situation. I congratulations to our mothers for bringing back peace to our County.”

Internal Affairs Minister Sirleaf said allegations of police brutality have not been brought to his attention, calling on people of the county to trust in the justice system.

“I am calling on you today to use this incident as a case study to avoid reoccurrence,” he said.

Meanwhile, he blamed citizens who normally plead with law enforcement officers to compromise conflict or cases to avoid corrupting the justice system while assuring that the government will do everything in its power to continue providing security despite the low-security presence in the county.

Thomas Mawulo, chair of the mediation committee and member of the civil society council, expressed frustration and regret over the mysterious death of the motorcyclist.

Mawulo said the meeting was vital to finding a solution to the tension that followed the murder.

“Hon. Minister, we as Civil society actors in Maryland, condemned the continued killing of innocent children especially motorcyclists who are buttressing government efforts in creating self-employment for themselves,” he said while assuring that they will work with the police to investigate the crime.

The Police reassured that it will continue investigating the murder, adding that they are also searching for some of the individuals who ransacked the station under the disguise of protest.

Josephine Allison, the spokesperson of the Maryland County Rural Women Association, frowned on the protest but said the women who participated were very angry.

Madam Allison said women of the county remain resolute in supporting the police apprehend perpetrators of heinous crimes including the killing of innocent children.