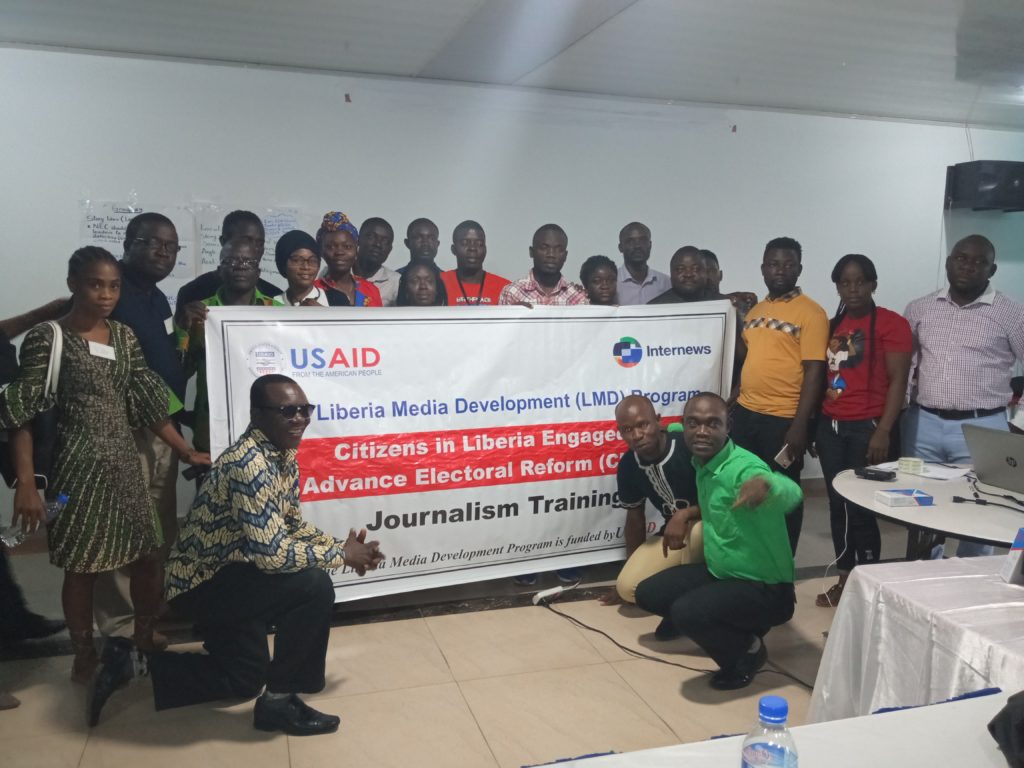 Two training workshops on election reforms reporting have ended in Monrovia, setting the pace for the project to begin.

One of the workshops – a Training of Trainers (TOT) – was held for mentors and leads of the six partners from Febraury 20-22, while the other drilled journalists on the rudimentary of election reforms reporting February 25-27.

Sixteen journalists have been selected from acorss the country ( one from each county; two from Montserrado) to form a fellowship of reporters. They will be trained on how to report about elections reform issues.

The project, dubbed Citizens Engaged to Advance Electoral Reform project (CLEAR), will run for eight months and will give media coverage to Liberia reforms issues by featuring people’s views from across the country.

It is part of  Internews Liberia Media Development Program funded by the United States Agency for International Development (USAID).

The implementing partners will train and work with fellows to report on the CMFs and other activities. According to him, 50 journalists will be trained as electoral reform reporting experts for the period of eight.

Jefferson Massah, who is the Senior Community Radio Advisor of Internews, said 30 community media forums (CMF)  will be held across the country – two in each county. These CMF, he said, will ensure ordinary citizens participation across in electoral reform dialogues”.

At the same time, Crispin Tulay, Internews Journalism Advisor, added: “Let your reporters focus on writing story about what the ordinary people will say about factors which affect voter turnout, how elections are organized, CSOs and political recommendations for reform, as well as the tenure of the lawmakers and the president.”

Madam Barwudu Johnson, Coordinator of the Election Coordinating Committee (ECC) who presented at one of the workshops, urged journalists to stimulate citizens during impending CMF to trigger their views about reform issues
Franklin Bonner, Deputy Chief of Party of USAID’s Liberia Accountability and Voice Initiative (LAVI), said he expects the CLEAR project to increase advocacy that will influence lawmakers and policy support the reform process.

Atty. Cephas N. , Legal Research Officer of the National Election Commission, suggested that the should also delve into the Supreme Court’s opinion on election disputes.

“Because these opinions from the Supreme Court are automatic laws, so let the people be informed during all your forums so that they cannot waste time talking about them,” Atty. said.
At the end of the trainings, participants expressed optimism about a sucessful porject.

John Kollie, the LMDI Executive Director of LMDI said, “I think the training gave us basic knowledge on reform issues and provided the skills on facilitating election reforms forum.”

Fatu Boely, a reporter with Local voices Liberia who is based in Bong County, said it she’s now charged with the responsibility to focus her reporting on election reforms issues.

“I am now able to report on what ordinary Liberians want to see change in the constitution about elections in the country,” she said.

Siatta S. Johnson, President of FeJAL, described the training as “helpful” to the reform process in Liberia, noting that it will help to expand electoral reform stories at the national level that will inform decision makers.