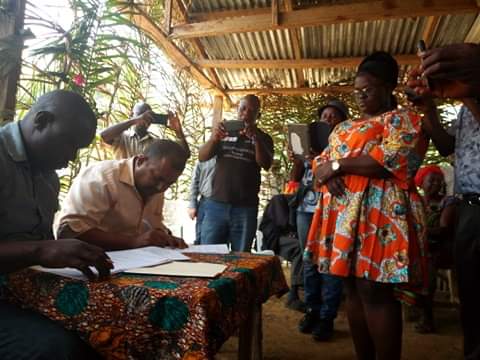 Report By: Henry B. Gboluma, Jr

“We are here today based on the trust you placed in us to manage our community forest about 6 years ago – since 2013,” the Secretary of the Korninga ‘B’ Community’s Executive Committee, Mr. Peter Forkpah said at a gathering ment for the consummation of the deal.

“We find a company, Indo African Plantations that is willing to do business with us, so we are here to sign the social agreement that we have agreed on..”

The Technical Manager of the Community Forest Department of the FDA, Atty. Gertrude W.N. Nyaley read and explained the agreement in simple English to hundreds of citizens, local government officials, civil society representatives and the officials of Forestry Development Authority (FDA).

After the validation of the agreement, Aaron F. Mulbah signed on behalf of community, while the Assistant Vice President of Indo African Plantations incorporated Mr. Chirajib Suy signed for the company.

The agreement had taken immediate effect and will last for 14 years. The Community Management Forest or CMF covers a total area of 31,318 hectares.

Under the fiscal consideration, the company will pay the amount of US$1.25 percent per hectare annually as land rental fee. The affected communities stand to benefit 55% while the government through the FDA will benefit 45%.

As part of the fiscal consideration, the logging company will pay the amount of US$2.50 for every cubic meter of logs. The total amount will be deposited into the community’s bank account August every year.

Under the social agreement, the company will contribute US$30,000.00 and US$25, 000.00 annually as scholarship fund and medical support respectively directly to the community.

Additionally, a paramount chief office building and modern youth center will be constructed by the end of the second and third year of the company operations.

The company also agrees to build plywood or sawmill factory to boost employment opportunity in the affected communities..

As for the Korninga ‘B’ Community, residents  agreed to always inform the company of all relevant traditional practices and regulations to ensure compliance by the company.

According to the arrangement, both parties shall review the implementation of the contract after every five years.  And the agreement shall be terminated if the company failed to commence harvesting operation within 18 months as of the signing date.

The K.BCFMB Chief Officer, Aaron F. Mulbah told LocalVoicesLiberia  that the community is set to work along with the company in the “ best interest of the affected communities”.

More than six towns and villages are within the company’s operational areas and will be affected by this concession deal.

FDA Regional Forester, Ruff Varney told locals that  “the forest belongs to you, make good use of it”.

She also called on the community to inform FDA about any issue that might happened to them during the concession period, nothing, “we will always be here to work along with you.”

Joseph D. Kenneh, a civil society representative informed the community that the agreement with the company has now become law.

He added that everything that is written in the agreement is binding on the community and the logging company, adding “ And action that goes against this agreement, the law will punish you.”

Out of the 16 members on the 3 committees (K.BCFMB, Community Assemble and Executive Committee) clothed with the authority to manage the forest, 14 were in attendance.

“Our people will soon be having some job to do and little by little our towns and villages will be opened, “ he said.

Alfred B. Scott, Gbarpolu County CSO Secretary described the process leading to the agreement as  “participatory”, adding that it is “the beginning of another responsibility [given] to the community”.

Added Mr. Scott: “We are going to be monitoring the community and the company to ensure the implementation of the agreement.”

Many people, who attended the event, described the arrangement as “community driven development initiative” and  pledged to support the deal.

They are optimistic that the agreement will create thousands of new jobs for people in the county.

They  lauded the government for granting community in rural Liberia the right to govern their own forests..