Gbarpolu County: Town Seeking Answer After Dismissal of More Than Me Principle Accused of Sexual Assault 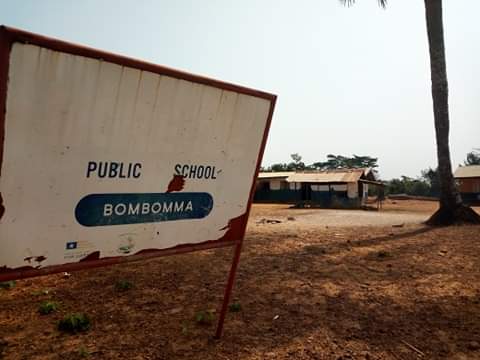 Gbarpolu County – Some concern citizens and members of the Parent Teacher Association (PTA) of Bomboma town are seeking answers from  More Than Me after the American charity dismissed a principal of their community school.

The school, Bomboma Public School, is located in Gungbayah Chiefdom in Bopolu district and is being operated by MTM as part of the public private partnership schools module in the country.

Arthur O. Sharpe was sacked recently by MTN but the community is claiming that the should be more beyond his sacking.

Deddeh Sirleaf, Chairlady of the community, describes Sharpe as a “good teacher” when he took on the assignment, but he later became troublesome.

Madam Sirleaf told LocalVoicesLiberia that before his dismissal, many female students were frequently complaining that Mr. Sharpe was frequently making sexual advances at them.

“They (the female students) told us that the man was giving them a hard time [and] I asked them ‘who is the man?’ And they say the new teacher that they brought here,” she explains.

The children informed us that in the night, Mr. Sharpe always went around them, forcing them to go and have sex, she said.

The situation became alarming when the principal took substantial steps in persuading a female student to enter his room during the night hours.

On November 29, 2018, student Bendu Chowoe, 13, was being on was attending a night dance, and later Mr. Sharpe asked her to conjure two of her friends and when she did not succeed, he turned on her.

“Then the principal held my blouse and my hand and carried me down there, to his house,” Bendu said.

“I think it was 9:00 in the night, I said, ‘principal where are you carrying me? He said come lets us go’. He wanted to open the door for him to push me in the room, that how I managed to escape.”

Residents have been giving their own accounts of the alleged sexual assaults the MTM principal made against girls of their community.

Hawa Konneh, 32, recalled some of the allegations female students were making prior to the dismissal of Mr. Sharpe.

“The ones I heard is that he was carrying the girls in his room, and Daniel Tokpa asked him why are you holding the girl, carrying her in your room? And the principal then described Daniel as someone with a sharp mouth,” she explains.

According to Konneh, the exchanges between Sharpe and Tokpa erupted into a fist fight, and the former later fled the town after biting the latter’s ear.

Francis Chowoe, General Town Chief of  Bomboma, stressed that they are demanding the charity organization to explain the rationale behind the principal sacking and show why he was not forwarded to the police for investigation.

“This Principal was brought by MTN, so we have to relate this matter back to MTN for them to give us a reason as to why he left,” Chowoe said.

“What I heard – whether it is true or not – let the girl be taken to hospital for a checkup. We the parents are still in doubt.”

At the same time, Salayah T. Kesselee, who is the Co-chair of the Parent Teacher Association, claimed that the association had earlier warned against Mr. Sharpe constant sexual advances toward his female students.

Kesselee alleged that because MTN was entangled in a serious serial rape scandal in Monrovia, it permanently dismissed Sharpe in order to set the record straight.

But Kessellee is calling on people of the Gbarpolu County to “wake up and protect the future of school going children”.

He added that the PTA has already informed the MTM administration and the government about the alleged sexual abuse of female students.

The PTA and ordinary citizens are anticipating government speedily investigations in the said situation, he said.

Meanwhile, Sharpe has denied the allegation but said he was “under the influence of alcohol on the night of the fight with Tokpa.

In a letter to Charles Kabba, the Bopolu District Education Officer (DEO), Sharpe claimed he was unable to record whatever went wrong or right.

“I remember standing with a girl but did not remember anything about taking the girl into my room that night,” he said.

“Those things were just mere allegations that people are trying to make against me because of what transpired between I and Daniel Tokpa.”

The incident was later reported by Alexander Fallon, the Chief Program Officer of MTN, on December 10, 2018, to the Bopolu’s DEO.

“Mr.  Sharpe allegedly assaulted a teacher, Mr. Daniel Tokpa, causing damage to his ear and also escorted 3rd-grade student who is 14 years old to his house late at night,” Fallon stated in his letter to the DEO.

MTN has since demanded that the DEO remove Mr. Sharpe from Bomboma Public School permanently pending an investigation.

The DEO said MTM had insisted that Sharpe gets dismissed although he was not on the Ministry of Education’s payroll.

“They hired the man service, they promised that they were going to be giving him stipend while trying for his name to get on the government payroll,” Kaba said.

“It was not me that recruited this gentleman.  My control over him is [was] limited because he is not under my control.”

When LocalVoicesLiberia contacted Mr. Sharpe recently to ascertain his current location and whether he was being investigated by the police, he said had left the community because he was restricted from going on the school premises and because he is not undergoing any investigation, he relocated to Nimba County.

“So do you expect me to be sitting there and no investigation, when I get my family and children to carter to? I not want for anybody to give you information that I ran away. That is false and misleading,” he said.

McIntosh would later die of AIDS, sparking fears that many of his victims might be infected with the virus. The sexual abuse of girls attracted global attraction following an investigation and released of Unprotected. by US-based news ProPublica.

The Government of Liberia (GOL) later ordered that MTM case re-open in order to determine new evidence and further culpability, but many advocates expressed incertitude.

This story was also shared with FrontPage Africa online and newspaper and has been published.