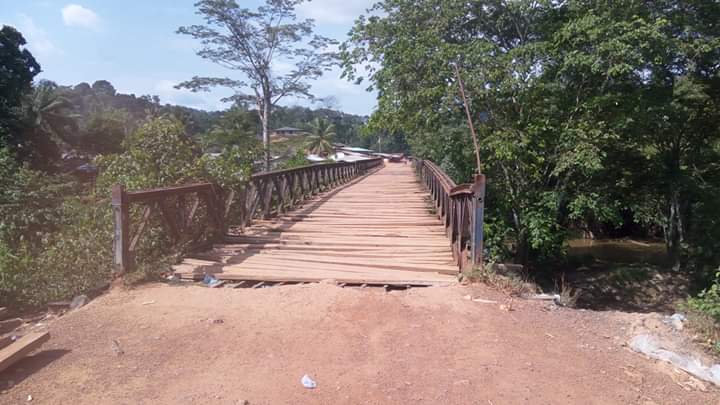 River Gee County – Liberians in River Gee and Grand Kru Counties have intensified their appeals to the government to rehabilitate the Jaquiken Bridge, which is at the verge of collapsing.

Locals in the area including traders say when the bridge is repaired it will ensure free movement of people and promote trade between the two neighboring counties.

“This bridge was constructed in the 70s and we the residents of the Jouqiken Community have been living with this situation for years now,” says Sunday Weadutu, a community elder.

“Despite numerous SOS calls to past and current leaders, no efforts have been made by them to bring relief to us, local people.”

She said all the steel plates and poles on the bridge are all falling apart, something that is posing a serious risk to pedestrians and vehicles’ users.

“We continue to risk our lives on a daily basis just for our families to survive and to send our children to school,” said Weadee, another marketer who was traveling to Grand Kru County.

Meanwhile, the advisor of the Southeastern Motorcycle Union Matthew Brooks says the current condition of the bridge has resulted in the loss of several lives of travelers of both counties.

He says motorcyclists have been the most victims since the bridge became very deplorable.

Brooks added that the condition of the bridge is appalling, a situation that will worsen in the coming months when the rainy season starts.

Brooks told reporters that vehicles owners and business people are now finding it extremely difficult to transport their goods to either Grand Kru or River Gee Counties.

The situation has resulted in the hike in transportation fares as well as other basic commodities, he said.

He said and several other road users then pleaded with President George Weah make a timely intervention in order to restore the hope of locals in the two counties.