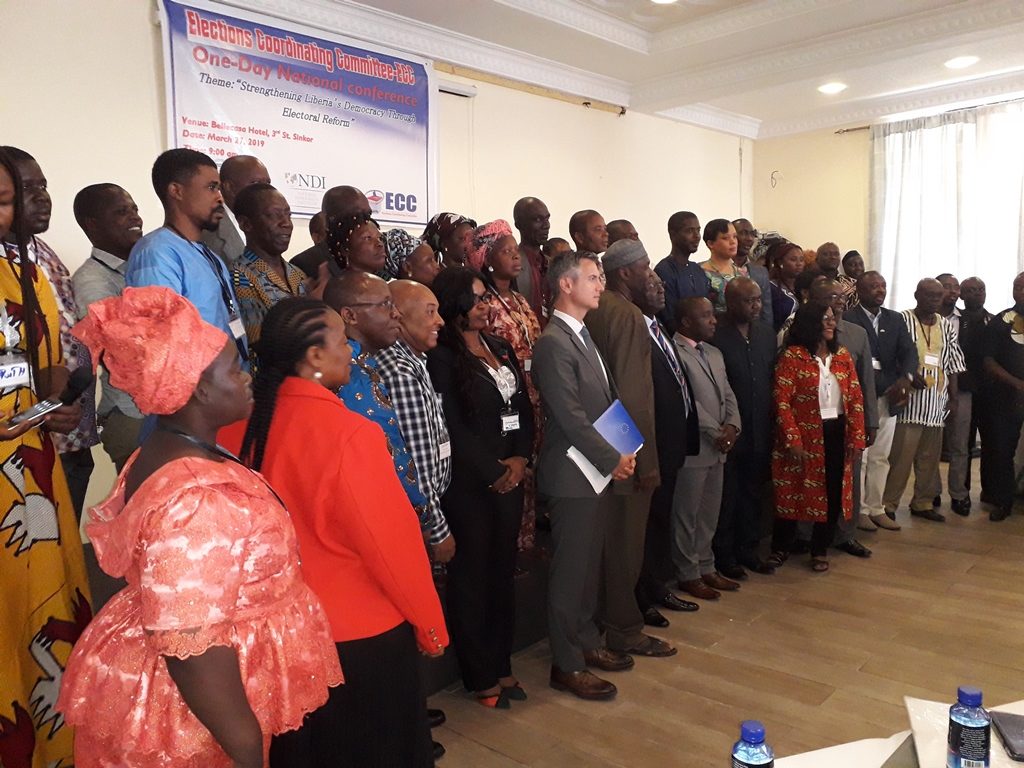 Monrovia – The Deputy Speaker of the House of Representatives has assured that the body is committed to the passage of reforms that will improve the conduct of future elections in the country.

Representative Prince Moye says “Promoting the improvement of our election process should start as soon as possible and the Legislature is committed to play its part”.

The Bong County lawmaker was speaking Wednesday, March 28 in Monrovia at a one-day conference on electoral reform organized by the Election Coordinating Committee, ECC.

The event brought together CSOs, political parties, the media, traditional leaders, women and youth groups from across the country as well as international partners.

Serving as the launcher of the conference, Hon. Moye expressed optimism that recommendations from the conference will suggest changes and will require making “amendments to legislation and even the Constitution that govern our electoral process”.

“Electoral reform is part of the broader democratic reform effort to make our government more credible in the eyes of the public and build their confidence. The degree to which this reform process will be inclusive is also important for our development process generally in the country,” the Deputy Speaker said.

“The House Committee working with the ECC will provide the opportunity for the development of an all-inclusive bill on electoral reform so that improvements can be put into place prior to the next elections”.

He added that the House will work with civil society organizations and called on the ECC to focus on reforms issues as outlined in the country’s electoral reform priorities.

Calls for reforms in Liberia’s elections laws have intensified since the end of 2017 elections, with stakeholders and international partners proposing several Constitutional, Statutory and Regulatory changes.

The LRC’s principal mandate is to supervise the country’s law reform process to ensure systematic development and reform, including in particular the unification and codification of the laws, the elimination of anomalies and the generation of consistency and harmony in the law, the repeal of obsolete and unnecessary enactments and generating the stimulus for constitutional reform.

And Cllr Kanneh mentioned “some pitfalls of our election laws”, which he said require reforms in order “to conform to the contemporary needs of societies; to address issues that were either nonexistent or not foreseen at the time those laws were first adopted or enacted”.

Said Cllr. Kanneh: “Like any well-meaning Liberian and considering the position in which I sit, I have had time thinking about just what some of the pitfalls of our electoral laws are for which the need for reform is important.

He also highlighted the tenure of the commissioner of the  National Elections Commission, stressing that the country “must endeavor as much as possible through the enactment of the necessary legal instruments to guarantee the independence of the NEC.”

The LRC Chairman also called for change of the election date, and the amendment of Section 2.9 of the Elections Law that gives power to the NEC to create political sub-division, and Section 2.9 (q) which gives the commission the “power as sole judges of all contests relating to election results and whose decision is only appealable before the Supreme Court.”

“To ensure that the NEC remains neutral and more focused on running the election systems and mechanisms, it would be prudent that elections disputes are placed in the province of the Judiciary not only at the very terminal stage of the Supreme Court,” he said.

“Critics of the National Election Commission have opined that the NEC cannot be the accused and at the same time be the judge to decide its wrongdoing”.

Meanwhile, the Chair of the ECC Atty Oscar Bloh says the conference was intended to discuss “issues of common interest that will be considered for amendment by the National Legislature.”

“The role of the ECC in the electoral reform process is not to lead but to stimulate broad-based public discourse and to generate information from ordinary Liberians who are the primary stakeholders in the conduct of elections,” he said.

He said prior to the conference, the ECC conducted Focus Group Discussions (FGDs) with men, women and youth groups in six of the fifteen counties and also held consultations with legal practitioners, political parties, media, and civil society organizations.

“The outcomes of the field research and stakeholders’ dialogues were used to develop four policy papers that will set the basis for the working sessions of this conference,” he disclosed.