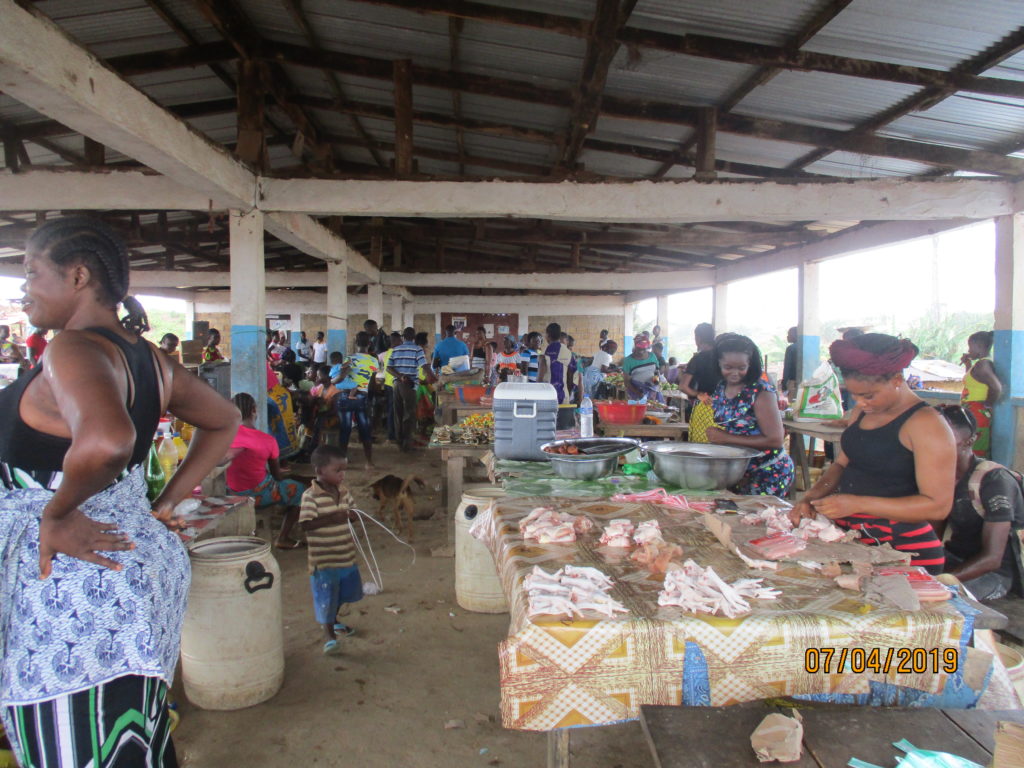 Barclayville – Market women in Grand Kru are calling for several electoral reforms including the change of Election Day and the reduction in the tenure of elected officials of government.

The women said they are prepared to go for a referendum to achieve this reform.

The market women indicated that they are fully ready to engage their respective lawmakers on the issues relative to the recommendations raised by national and international observers during the just ended 2017 presidential and Legislative elections.

The Marketers maintained that those issues reported to the government should not be taking lightly on its Pro-Poor agenda.

The marketers made the disclosure on Monday 8, April at the Liberia Media for Democratic Initiatives (LMDI) one-day community media forum on electoral reform under the project Citizens in Liberia Engaged to Advance Electoral Reform (CLEAR) Project. The forum was held at the Barclayville city general market.

Speaking at the forum, Tonia A. Gibson LMDI Legal Analyst and Quizzing Moderator said the initiative was funded by USAID through Internews Liberia aimed at sampling the views of ordinary citizens on things that affect them during elections in the country.

Mr. Gibson also said the forum also provides a platform for citizens to positively engage their lawmakers to revise those provisions in the constitution that are not in the best interest of the election system, in an efforts to cope with present-day realities and to alleviate the too much sufferings commoners go through on elections day.

The Barclayville Marketing Association Superintendent Welleh Nyanpan applauded John Kollie and his team as well as supporting partners for the positive steps taken to educate citizens on the ongoing electoral reforms process to gather local opinions concerning elections system in the country is a very good venture.

She described the six and nine years of tenure given to the elected officials as one of the major problems Liberia faced with today.

She said that Articles 46 and 50 of the Liberian constitution speaks to the tenures of both the President and the Legislatures (Representative and Senator), but said the nine years tenure for senators and six years for to both the president and representative are unreasonable too long for an elected office.

Madam Nyanpan narrated, due to the long tenure, there is a self-satisfaction with state actors not wanting to live up to the obligations for the people who elected them into offices.

“The reason why you see most of the lawmakers will continue to relax when they are elected is that the six and nine years the constitution gives to the lawmakers long time not to work. So they will not do anything until the end of their tenure that’s when they will come back to the people to pretend that they are fully representing them,” she lamented.

The Barclayville Marketing Association leader believes four-year tenure will be adequate for both the representatives and the president while six-year is preferable for senators to serve.

Welleh Nyanpan told LMDI gathering that, she is aware of the proceeding that leads to constitutional reform through a referendum, indicating it will work out when government and other international partners listen to the concern of the ordinary people.

“Sometimes our leaders think that to go through a referendum when a need to make an amendment in the constitution arises, but it’s simple when the ordinary people voices are heard”, she pointed out.

Also speaking a prominent businesswoman Rosaline Weah said the tenure given to the legislatures and the president need to be reexamined. She said, Liberia has wasted lots of time during the 14 years of civil unrest, and that this is a time to elect people who will be proactive to serve the nation.

“The fourteen years of war we experienced in Liberia, brought lots of setbacks, I know how a lawmaker will feel when he stays for good six years in power and do nothing. I think the six years are plenty that’s why most of them can be bluffing. I will suggest four years for both the president and the representatives and six years for the senators” she added.

The Liberian businesswoman is asking other advocacy groups to help push the voices of the locals to attract government’s attention so that the concerns of the locals can be heard. She indicated if the tenure of a president is reduced to four years and that of the senator reduce to six years, it will create competition among the leaders of the country.

“When the President and the Representatives’ tenure come down to four years and the senator’s tenure reduced to six years, it will create competition among the lawmakers” she narrated.

Meanwhile, several local leaders who spoke to the issue also shared a similar concern. One of those is a Sansum Wiah, who lives in the Jloh community of Betu and told our reporter that there is a need for reform to change the elections date from the rainy to dry season to have the equal participation of registered voters.

He said, for instance, Jloh statutory district that is surrounded by seven rivers during the voting process several citizens especially the physically challenged and the elderly can be denied from excising their political franchise, describing the unfolding situation as a total violation of their constitutional rights.

Mr. Wiah recommended that an independent body or elections tribunal be established to transparently adjudicate all elections matters that will arise from the conduct of elections, stating that National Elections Commission can’t be the play and at the same time be the judge, adding for free and fair elections Liberians should take that into account.

The community leader also seeks a referendum which he thinks is the proper way to amend the constitution. “The only we can change some errors in the constitution we talking about, is when we go for a referendum. I think LMDI and Internews Liberia have given us the basic education we needed, this is about time we wake up to hold our lawmakers accountable at the head of 2020 special senatorial elections through a resolution.

Mr. Wiah indicated that in order to achieve the task the media and the civil society have a great responsibility in educating the masses mostly the ordinary citizens through their various platforms.

For her part, Alice Doe another marketer urged President George Weah and the CDC led administration to support potential women who have future ambition to compete with their male counterpart in the governance process of the country, adding it is disheartened that the number of women lawmakers in the Senate and the House of Representatives is not encouraging at all.

She stressed that when government and other local and international organizations provide adequate support those women leaders, they are capable of making good laws in the best interest of women and children, by extension the country.

Madam Doe encouraged women in key positions in the government to muster courage and should use their position to pave the way for more women.

Meanwhile, the female advocate cautioned Political Parties leaders to create room to allow more female into their parties and appealed to the government and international community to condemn any patties that will want to limit the participation of potential women who have political intentions.