Women in Bomi County Call for change In Election Laws 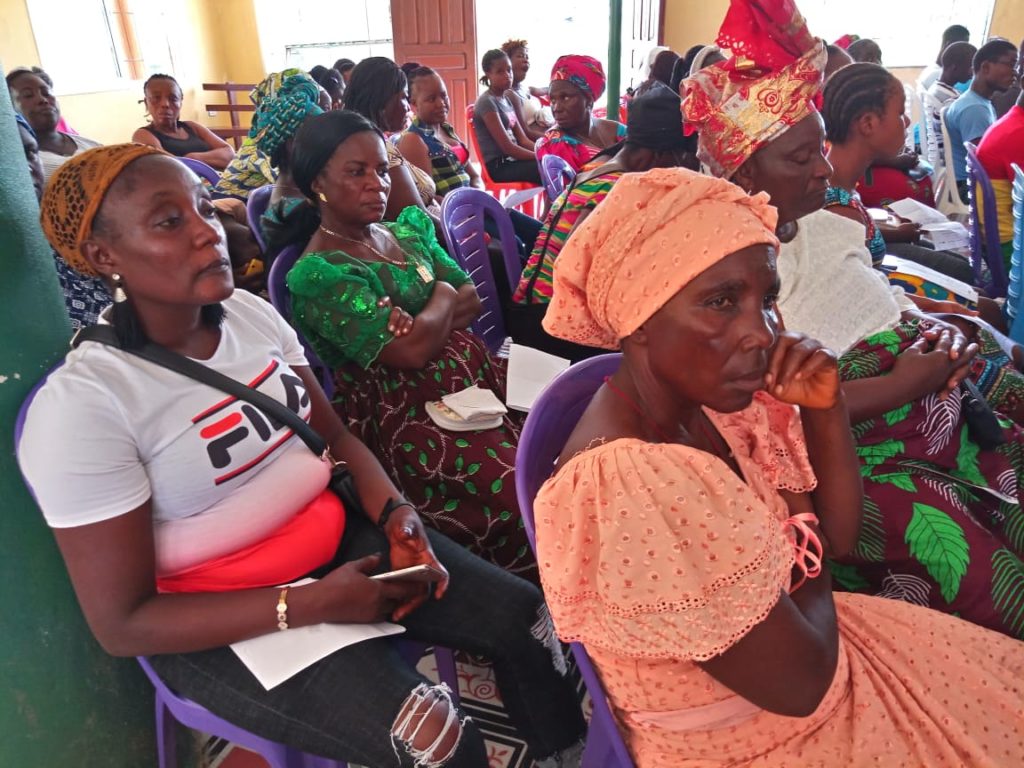 Bomi County – As Liberia gears up for 2020 mid-term senatorial and 2023 general elections, several women in Bomi County are calling for electoral reforms to address the prevailing political realities.

The Executive Director of a local NGO Veronica Johnson, who served as one of the panelists at the Tubmanburg forum, called for the allocation of seats to enhance women political participation and representation in the first branch of government.

She mentioned the different international laws and protocols of which Liberia is a signatory and also referenced the 1986 Liberian Constitution, which promotes women political participation but yet to be achieved.

“The parity bill is intended to compliment efforts of different laws that are available to promote women political participation”, she told participants at the forum.

“You see the issue we have now with the rape law? If we had more women in the Senate, lawmakers won’t be talking about the amendment of the Rape Law.”

The current composition of the legislature is an embarrassment to the people of Liberia, she averred.

Also serving as panelist, the student leader of the Bomi County Student Association Ms. Rebecca Jaykay spoke on the allotment of seats to women.

Jaykay referenced the resolution 1325, the Bejien Declaration and other laws that require government actions in ensuring women protections and political participations.

She said election provides the best possible opportunity to ensure that women are heard; their concerns addressed and their contributions are maximized.

She believes that to maintain peace in Liberia, women must also be on the decision making table “don’t get me wrong, it is not a competition between men and women, it is about making everyone important in the society” she added.

For her part, Madam Tenneh Moore asserted that the 30% allocation is in the right direction to promote women political participation. She highlighted the gaps in the economics status between men and women and asked for more special support for women.

She believes that most women are not financially strong for political campaigning, and men will not support women in times of elections stressing that campaigning requires money.

On the other hand Madam Maima Weaver, the Chairperson for the Bomi women initiative is suggesting that the tenure of elected officials be reduced. She wants all elected positions be reduced to four years. She claims it will help the government safe money for special elections like the upcoming 2020 senatorial elections.

Also commenting on the tenures of elected officals, Madam Hawa Tarweh in Gbaa Jarkeh said the issue has to do with the number of tenures elected officials are entitled to. She suggested that the presidency, the representatives and senators should have fix tenure and it should be a-one-term tenure.

She believes that a-one-term tenure will give other capable and educated people the opportunity to serve. “Other people need to get in the chair too so one person can’t just sit down there for lifetime” she said. She was clear on other people being part of the Government and not just one group of people.

For his part Mr. Boima Watson youth chair of Bomi County wants the election date to be change to from October to January. He believes that the change in date will give first time voters the opportunity to vote. “Some people will turn 18 in the election year so in January all those turning 18 will already be 18 and will be eligible to vote”.

Aaron T. Doe a visually impede man speaking on behalf of the Disable community also agreed that elected officials tenures should be reduced to 4years for all elected positions. He also mentioned that the disable community is usually forgotten after elections. He used the opportunity to call on government to prioritize the plights of people living with disabilities. “As for the disable people we are not important to them until elections, so we are just here waiting for come for elections”

On the contrary, Jesica Janga is asking for the tenure to remain the same. According to her most elected official need more time to complete project that might not be completed in two or four years. “Maybe the person started a road project and it is not completed in less than four year; so I think we shouldn’t charge the law,” she noted

Vivian Cooper wants the National Elections Commission (NEC) put mechanisms in place for registered voters to be allowed to vote in any part of the country. She said the fact you have a voter registration card should prove that you are a registered voter and should be given the rights to exercise your franchise in any part of the country. “The voting day we can have lots of issues with where we are registered; most time the NEC workers can push us around”.

In response to the suggestions the representation of NEC Mr. Luther Dean said the recommendations were good and will be shared with NEC; in order to be considered.

He said electoral reform is a process because it has to do with law. He explained that NEC will take all the proposals to the lawmakers to make a decision on the recommendation. “All what you have said is well noted and we are going back to our bosses with your recommendations, he added.”

In her parting comments Veronica Johnson reminded participants to look at the current make-up of the house and decide how to promote women political participation referencing the amendment of the rape law due to low representation of women in the Legislature.

The Community Media Forum is an initiative under the Citizen in Liberia Engaged to advanced Electoral Reform (CLEAR) project.  The project is one of Internews Liberia Media Development programs being implemented in collaboration with the Female Journalist Association of Liberia and community radio stations in across the Country with funding from USAID.