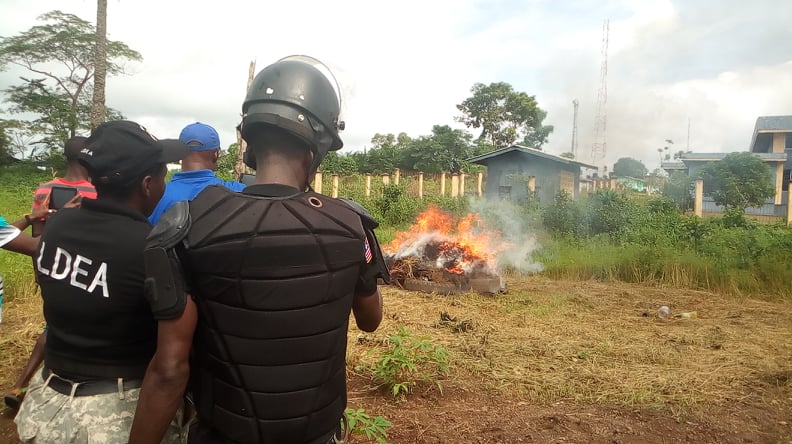 The commendations came in droves on Wednesday, June 26 as the world celebrated International Drugs Day, as Liberians and LDEA observe the day throughout the country.

In Gbarpolu County, locals rained praises on the LDEA for its continue fight against narcotic substances in the county.

Over L$1.8 million wealth of narcotic substances were burned in the Gbarpolu County, according to the LDEA county commander, David Togba.

Togba said officers of the LDEA assigned across the county seized the necrotic substances in 2018 and 2019 in Bopolu City, Gbarma District, Bokomu and Guo Nwolola Districts.

Later, many who witnessed the drugs burning exercises described its as “a deterrence” to drug users in the county.

“This is the kind of exercise that brings deterrent to those who find interest in taking in drugs,” says the CSO secretary of Gbarpolu, Alfred B. Scott

For another resident of Bopolu City, Sylvester Varmah said, “I would like to tell the LDEA commander thank you for what they have demonstrated here this morning.”

He said, “Because these drugs issues giving our young people a hard time in the community, it makes some of them not going to school. In fact, once they take it in harmful drugs, they cannot go to school again.

“To my fellow youth, please stop drugs abuse; it is not good for our health,” Bowel Nelson, a youth who attended the exercise, said.

Rev. Moses D. G. Tokpa, also a resident of the city, lauded the efforts of the LDEA that resulted in the seizure of the “huge quantity of harmful drugs.”

“I want to also inform our young forces (people), if you continue with drugs, you will be destroying your future,” said Rev. Tokpa

“Burning all these drugs today, for me I think is the beginning of the fight against drugs abuse in this county. So, LDEA. Thank you, we will help you to save our communities by not hiding drugs users,” added Madam Bendu Jah, president of the Rural Women group in the county.

Making remarks during the event, the County Inspector Edwin Davis expressed support for the LDEA agents and described their work as “great steps taken towards the drug fight in the county.”

Inspector Davis added that “Liberia wants citizens that she can rely on for the future”.

“If youths are involved in drug abuse today, [this] means that Liberia is not going to build the way we want it to be.”

He urged the communities to join the fight against necrotic substances in the country; adding, “Wherever you are living in Gbarpolu and the country at large if you see anybody with harmful drugs please let the LDEA know so that they can go there and seize it to help move our country forward.”

The burning exercise was held north of Gamboe-Zwedru highway about 5 kilometers away from Zwedru, the county’s capital.

the county commander Octavius Manning said another 28 kilograms of drugs could not be destroyed due to cases that are pending at the Zwedru Magisterial Court.

He named James Totoe, 32; Agnes Manneh, 45; and a lady identified as Pauline,37; are defendants in cases that are awaiting trial.

LDEA official said the drugs were arrested from various checkpoints and other entrances of the county especially from the way of Nimba County.

Zwedru city Mayor Cecelia Jolo thanked LDEA and citizens of the county for working collaboratively to tackle drug use and trafficking.

“Since I have been witnessing the burning of drugs, when I was not even a city mayor, today has amazed me most, because this is the very first time to see the LDEA making such a hugged quantity report on marijuana, Cocaine, and heroin been arrested,” Mayor Jolo said before the drugs were set ablaze.

“It has never been in this county, this means that you are working harder in my city and county as a whole, I must applaud for your hard work.”

Nancy Quiah, a 40-year-old resident of Zwedru, also applauded the LDEA but stressed that more needs to be done in the anti-drugs campaign in the county.

“You cannot say you want to fight drugs war when farmers in Liberia are planting, or growing marijuana,” she said. “So I think what the government should be thinking of doing now is to move on those that are planting marijuana in our country. If the government does that, I think they will be moving in the right direction.”

It can be recalled early this month the LDEA in the county raided several farmers in Boe-Town, Cavalla District of Grand Gedeh County.