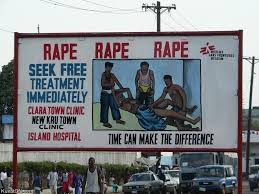 Maryland County –   A 12-year-old girl believed to have been raped in the Larma-Cox community in Harper City is sending out an SOS call for urgent humanitarian support to help get her advanced medical checkup and proper treatment.

The minor, according to her parents, is currently experiencing severe Virginia pains.

“As I speak, if there is nothing done for me to get good medicine, I am going to suffer in the future,” she said from her bed.

She was promptly taken to the health center for a check-up following the alleged incident but she now says the pain won’t go away.

Her medical report remains unknown, and the police have officially remained tight-lipped about details of the investigation into the incident.

But Police Spokesman Sam Kollie told Local Voices Liberia via mobile phone that many media institutions across Liberia often misinterpret medical reports thus causing the police to deny them access to the information.

However, one Police source in the county has confirmed that the medical report in their possession indicates that the victim was actually raped.

The victim alleges that on July 31, 2019, she was “raped” by one Aaron Ndidie, a student of the William VS Tubman University in Harper City.

“After the game, in the night I was sitting at the hand Pump in the Community when he went to get water and he asked me why I was sadly sitting at the hand pump?  I told him my head was hurting,” she recalled the incident to a Local Voices Liberia reporter in Harper City.

“And he said let’s go home I have tablets to give you. So, I followed him and as soon as we entered his room, he closed the door and asked me to advise him, but I did not answer him and he took off my clothes, pushed me on the bed and got over me.”

According to her, the alleged rapist aggressively covered her mouth so that her brother who went looking for her could not hear her scream even though she was crying for help.

“My aunty noticed it and she pushed Uncle Aaron’s door; it was that time that my uncle left from over me and ran away.”

The alleged perpetrator is currently on the run, according to officers of the LNP in the county.

Meanwhile, her mother too has joined the victim in seeking humanitarian organizations’ support for her daughter to get proper medical care.

She said, “My daughter is suffering from [the] inner problem, if there is nothing done, she will die slowly. So, she is currently at my house, if anyone wants to help, let do so now.”