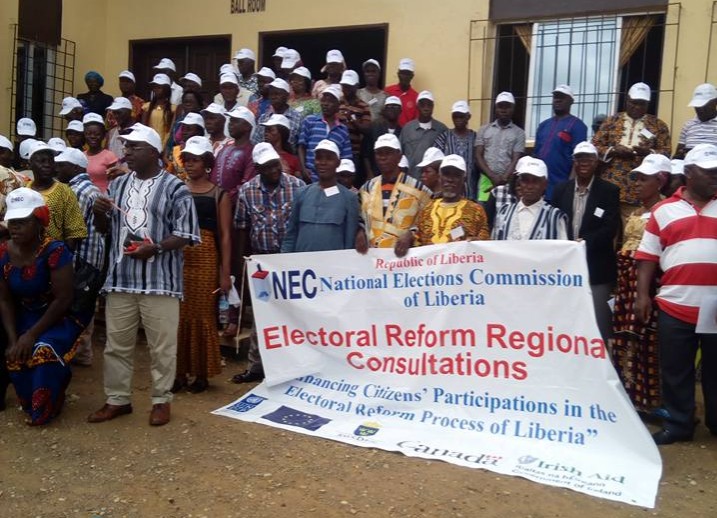 According to Atty. Nathan P. Garbie, Deputy Executive Director for Programs at NEC, the activities were part of ongoing regional awareness and sensitization campaign by authorities of the commission which kicked off June of this year.

“It comes from several recommendations from the 2017 presidential and representative’s elections of Liberia and was presented to the commission by stakeholders of elections including the civil society organizations, political parties as well as international observers and partners,” Garbie said.

“Based upon that the NEC is soliciting views from Liberians on the current electoral laws and policies and at the same time educating the citizens to pave the way for the revision of the laws and policies that may call for a referendum.”

He continued: “Today we are in Grand Gedeh, two weeks ago, we were in Grand Bassa, Bong and Bomi Counties [and] hosted the same regional consultations and sanitization with stakeholders with respect to reviewing the electoral laws of Liberia – those that are not realistic with our election can be changed and what need modification can be modified for good democracy.”

For his part, NEC senior legal officer said political parties’ regulations, NEC’s judicial functions, and women participation, date of elections, and voter registration, election administration, electoral districting, and outreach among others are reform issues that have been recommended by citizens from across the country.

Cllr. Jalloh told reporters that the commission is expected to internally conduct a lesson-learned conference on recommendations made in order to examine its shortfall and where possible amendments can be made in order to meet international standards.

“As we speak the NEC has set up a technical working committee to develop the roadmap on the plan of recommendations soliciting from the public,” Cllr. Jalloh said.

“It is our hope that by 2020, if all goes well, a referendum can be conducted with those that need constitutional revision and then other recommendations can be made or adherence to the laws can be made to those that just need to be relatively reviewed.”

Meanwhile, participants at the Zwedru gathering were drilled through the relevance of electoral reform and its roadmap and the way forward for the roadmap on the reform process.

Speaking on behalf of the participants, George Quayee of River Gee County suggested that obtaining first-degree education should be a key qualification for an aspirant for the Legislature.

“Look at that house, it’s a house of decision making and representation, not a playground. So, we need to put in our election law that before anyone is elected to be a representative or a senator that person must be a first-degree holder in any discipline.

“We are living in the 21st century where people understanding is increasing every day, gone are those days where anyone should just be elected because when he/she is educated and elected as a lawmaker that person will have good talking points to benefit his/her constituency.”

“Today we have many of them missing sessions upon sessions because they have nothing to contribute in session, therefore, they stay away, this is one of the major reasons why we are still in hardship especially we southeasterners,” Quayee argued.