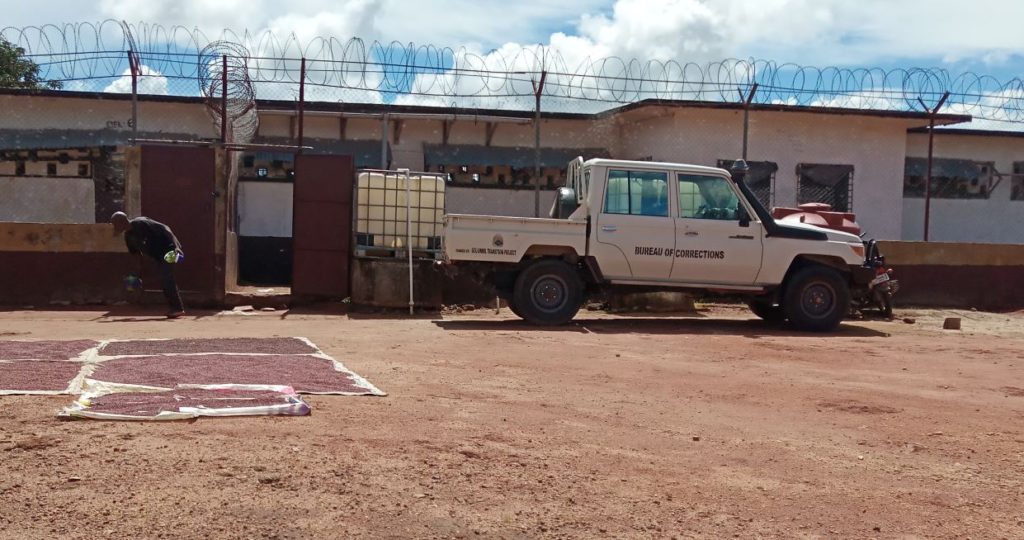 Voinjama, Lofa County – One reaching the main prison facility situated on an isolated reddish hill in Voinjama city is often greeted by echoes of angst.

The lousy outcries of inmates – convicted and accused – penetrate the walls of this correction facility built in 1978.

These inmates are gnashing their teeth and desperately yawning for daylight. It is the over-crowdedness that makes life even more miserable for them. Taking a bath here is a rare privilege.

The situation at the Voinjama Central Prison is a violation of these inmates’ rights, one rights activist said.

But all is not hellish for them. Just outside the walls is a massive plot of land covered with mixture of crops.

The rice has just started bursting. The beans are already ripe for harvest. The cassava is growing fast, too. This farm was cultivated through the concerted effort of the prison’s administration and some cooperative inmates.

Despite the glimpse of home-grown food, supply to the prison is never enough due to the influx of inmates.

The number of inmates has just skyrocketed, doubling the maximum capacity for which this prison was originally designed.

The prison was designed for the detention of a maximum of 50 inmates. There are currently 107 inmates (all male) in the facility, 62 of which are pre-trial detainees while the rest have already been convicted and sentenced.

There are at least 18 to 20 inmates bundled in each cell meant to shelter at most 10 persons.

The last time the prison saw a record high number of inmates was about five years ago, when it housed 70 to 75 persons.

Mohamed V. Sesay, who is the County Human rights officer for the independent National Commission on Human Rights, said the condition at the prison is a “violation of human rights” especially pretrial detainee held beyond the statutory period.

“There should be no reason why you keep someone in prison for more than two terms of courts. If the government cannot draw up indictment against such person, that person should benefit from Jail delivery,” Sesay said.

“I think it’s time that the government expands that prison to meet present day reality. People’s rights should not be violated simply because there is no adequate space”.

One of those bearing the pinch of the deplorable prison condition is 20-year-old Francis Karbar.

Karbar has been languishing in this penal colony for almost a year now after allegedly breaking through one of his father’s tenant’s room and made away with valuables.

It’s more than a year but Francis is yet to be tried.

“Because of the time he has stayed here, we are told to keep watch on him very closely; we are very careful before he organize jailbreak,” said one prison guard, who suspects a possible jail break.

Many people in the county say the current situation is alarming and warrants the attention of government and relevant stakeholders.

Jacob Kollie is a political activist in the county. Mr. Kollie believes that the government should make this a matter of urgency so as to avoid any future unwholesome act.

“You can’t stockpile people like that, just like sardine. Government has to do something to address this issue now before it is too late, said Kollie.

Meanwhile, concern about the lack of adequate food supplies to the prison is increasing.

An official of the facility, who spoke on anonymity, said the food ration they receive from government cannot cover all the inmates.

“The government is still dealing with the old statistics when delivering our food ration. At that time we had around 70 to 75. This is the number they used to bring our food. Now, the food can’t even stay long,” the source said.

“Only the rice and cassava farms we make can really help us sometimes. Had it not been so, we would have had some serious trouble here, or even worse – a jail break.”

Supply of food is regular from the government, although there are frequent delays especially during the rainy season when the road gets messy and impassible.

“Right now, as I speak to you, we have not received our supplies yet. We’re in agreement with one vendor to supply us at least two bags every day until our supply can come,” the source said.

“Once our supply comes, we will pay him back his rice or if he says he wants money, we will find it and pay him.”

Atty. Michael Jeke is a human rights lawyer and Legal Associate of Carter Center in Lofa County. Atty. Jeke says the congestion of the prison is due to the increasing burden on the county attorney, who has to prosecute several cases within a limited period.

“One of the number one reasons is that you have a single county attorney who is prosecuting over 50 to 60 cases,” he said.

“And looking at the structure of our court system of Liberia, the court opens on a specific term and closes on a specific term. Looking at the process of gathering evidences and drawing up indictments, sometimes the county attorney can only be able to prosecute 5 to 10 cases. So if a case is not heard in a particular term, you have to wait for another term.”

Liberia’s Criminal procedural Law calls for an accused to be tried within two terms of court at most.

And for the human rights lawyer, a County Attorney, who is usually overwhelmed with gathering evidence and drawing up indictments for accused persons considering the high number of cases in the county, is unable to meet the timeline as provided by law.

Atty. Jeke has suggested an assistant County Attorney, who will help ease the burden of prosecuting scores of cases.

Meanwhile, the County Attorney of Lofa County has disclosed that the lack of an assigned vehicle to him is contributing the delay in the prosecution of cases.

Cllr. Luther J. Sumo also said “bad road condition and unwillingness of relatives of inmates and prominent citizens to stand their bond for billable crimes” are causing the prison is be overcrowded.

The land cruiser used to move around the county to gather evidence in order to prosecute cases has broken down, added Cllr Sumo, who disclosed that he was only able to prosecute four cases in the last term of court.

“As I speak to you, my car’s engine has been overhauled two times and is currently packed. I have to use motorbikes to travel places’’, said Cllr. Sumo.

“The road is very bad now; it’s not easy to bring witnesses to fast-track cases. We even have 10 persons in the prison who are sentenced for life, but we can’t transfer them to Grand Gedeh because of the deplorable road.”

At the same time, relatives of indicted persons often decline to file a bond on their behalf. This is most likely because some of these inmates are recidivists.

“We don’t deny their rights. We have provided an opportunity for someone to stand their bond but … nobody is willing to come. They usually say that person is over 18 years, so he should take care of his own trouble,” the County Attorney said.

This story has also been published by FrontPageAfrica .