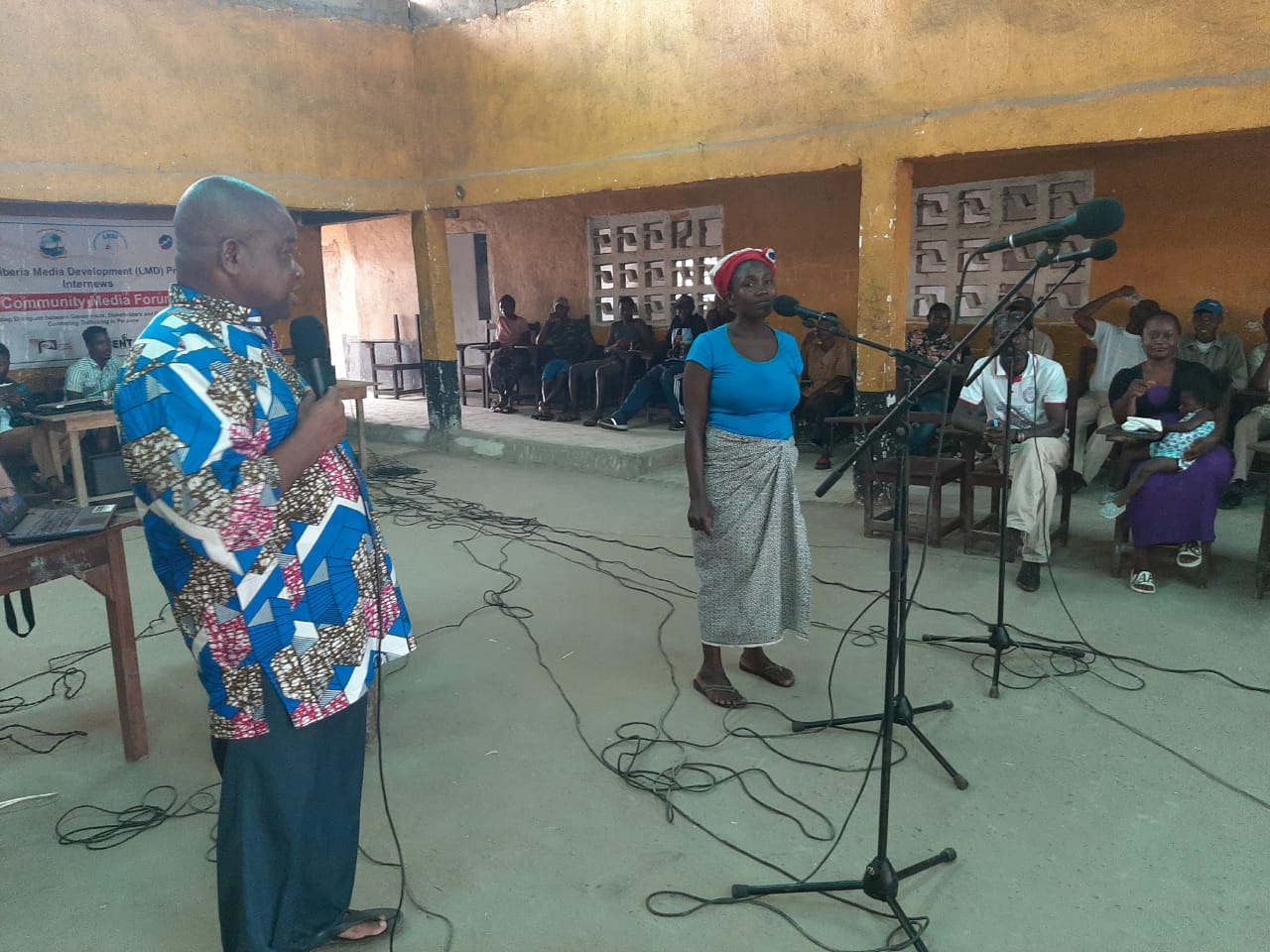 Monrovia – Adolphus Satia, the director of the anti-human trafficking secretariat at the Ministry of Labor, says he is convinced that the awareness on human trafficking is gaining some traction in the country.

“I’m convinced that with the level of awareness that have been done, to some extent, we can try minimize human trafficking,” Mr. Satia told LocalVoicesLiberia.

He was speaking following the end of a community media forum in Fendell, Montserrado County.

The CMF was organized by the Liberia Media Democratic Initiatives (LMDI) with funding from USAID through Internews’ Liberia Media Development project. It was intended to sensitize community members about human trafficking and the grave impact it has on the country. Scores of members of the Fendell Community in Montserrado County attended the CMF on Human Trafficking held on December 21, 2020. The CMF was organized by LMDI with funding from USAID through Internews. | Photo by Alpha Daffae Senkpeni

“I’m convinced that with the level of awareness that have been done, to some extent, we can try minimize human trafficking.” – Mr. Adolphus Satia

Liberia scored low in the last United States’ State Department human trafficking report, putting the country on the “tier three watch list”, which meant Liberia had to do more to improve in the next report or risk losing millions of dollars in none humanitarian funding from the US government.

“Government is challenged when it comes to resource mobilization” and therefore relies on international partners to increase public awareness about human trafficking, Mr. Satia said.

“The communities are getting the awareness and are now beginning to understand what human trafficking is and how they can be able to deal with would be traffickers” he said.

He continued: “People are beginning to understand that if somebody comes to your town or village to ask for their children to live with them in Monrovia or other cities, the first thing they need to do is to get the town chief or a police officer involved first – to be a witness so that when that child is being ill-treated then you can be able to get your child back and push for that person to be prosecuted.” Mr. Adolphus Satia, the director of the anti-human trafficking secretariat at the Ministry of Labor. | Photo by Alpha Daffae Senkpeni

With a budget allotment of US$50,000 by the government to support the work of the national anti-human trafficking taskforce, Mr. Satia said they will continue to focus on achieving the five years national action plan.

The plan focuses on prevention, protection, prosecution and partnership with international partners to curb human trafficking in the country.

Attorney Tonia Gibson of the LMDI led the legal explanation of Liberia’s anti human trafficking law during the forum.

He said explaining the TIP law by simplifying it to the community members and screening short video documentaries to further explain the impact of TIP have help people understand the nature of the crime and its impact.

“From the kind of questions they are raising or posing to us [at the CMFs] I can tell you that their understanding is improving,” Atty Gibson told LocalVoicesLiberia following one of the CMFs in Bong County.

“I’m not really certain about what was done in the past – whether it was properly articulated but with the new process and the way we breakdown the law into parts and simplify it, it is helping”

He continued: “Our people learn quickly from virtual images than just reading to them – so the video explains the definition of trafficking and so when you add the video to the simplified meaning of trafficking, then you observe that people will get it so clearly that they can respond to you in a clear manner.”

The law banning trafficking in persons defines it as the recruitment, transportation, transfer, harboring, or receipt of a person by means of coercion, or by abduction, fraud, deception, abuse of power or of position of vulnerability, or by giving or receiving of payments or benefits to achieve the consent of a person having control over another person for purpose of exploitation.

Atty. Gibson now expects the national anti-human trafficking taskforce to do “follow-up on the cases we have observed in the counties so far”.

“From the kind of questions they are raising or posing to us [at the CMFs] I can tell you that their understanding is improving,” Atty. Tonia Gibson, LMDI

He added that while conducting CMFs in several communities in the country they observed “glaring cases” of human trafficking that the authorities must further investigate. He specifically mentioned incidents in Grand Cape Mount and Grand Basssa Counties

“What we are doing right now is create awareness to prevent the increase in the number of children that are victims of human trafficking but the government needs to play its part,” he said. Viola Lincoln, who attended the CMF in the Fendell Community, promised to be “one of the eyes for the taskforce” to watch how children are treated in her community.

“They should not just bring somebody child to stay with them and treat them anyway,” she said, adding that she now knows how to report suspected TIPs case to the taskforce.

Another community member, Stephen Sonneh said before attending the CMF he did not know the signs of human trafficking.

“Today, I have the knowledge about TIPs and if I suspect human trafficking in my community I now know how to proceed in reporting it,” he added.

James Folleh, a block leader of Fendall community, added that he’s more knowledgeable about the impact of human trafficking on the society and will further lead the awareness about the crime in his community.

“I’m going to mobilize my people to go against this thing because these are things we see happening in our community so I will help give them the education about those that come to take our children to other places under the pretense that they will send them to school,” he said.