Jangalojuba – A Coronavirus Song That May Just Save So Many Lives 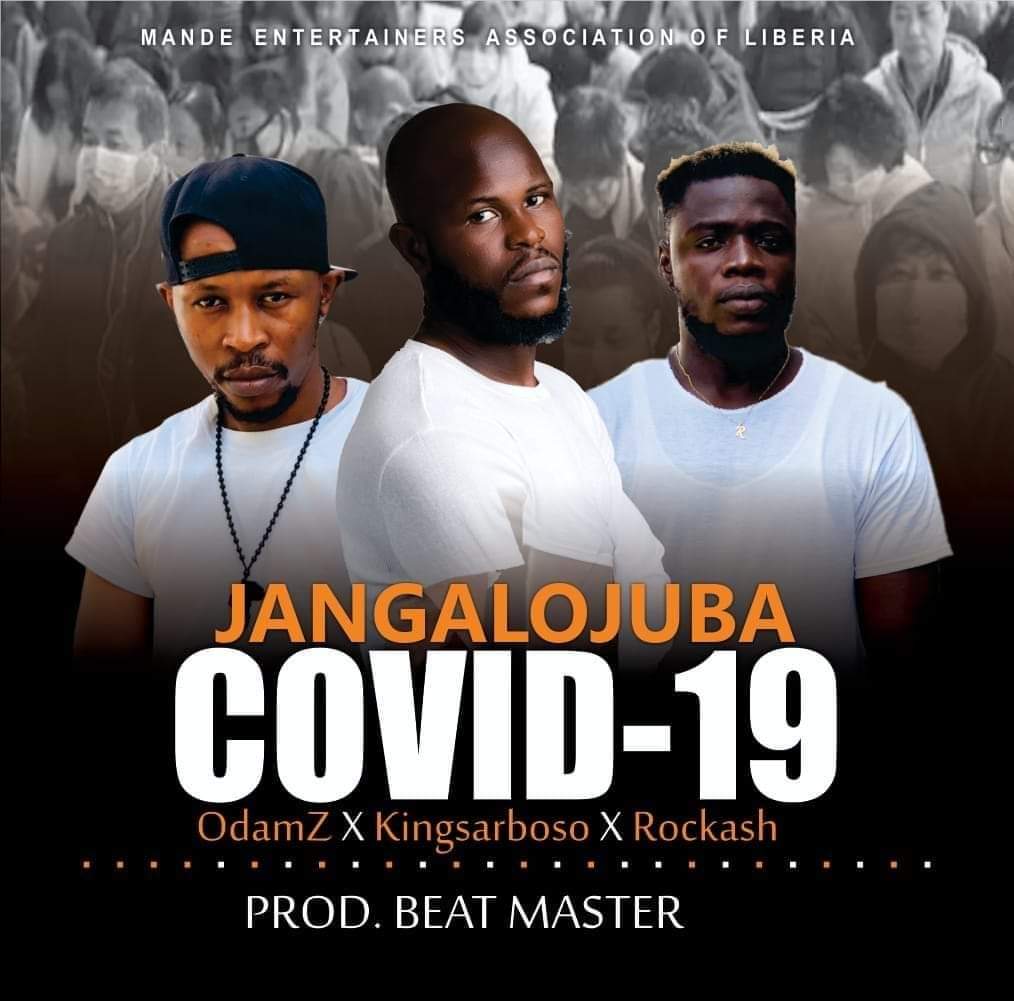 Close to a dozen of songs by superstar Liberian artists have been produced in the last two weeks to raise awareness in the fight against Coronavirus. The songs, including the one by Liberian president George Weah, have been keeping the nation on its heels.

But unlike everyone else, the latest song, titled Jangalojuba by three superstar Mandingo HipCo artists, has appealed to me the most; and the reasons for this are pretty much obvious: I am a Mandingo.

I lived through the Ebola crisis in 2014 and saw the devastation it did to people in Montserrado electoral districts 2 and 13. In fact, I led a community based organization in Steven Tolbert Estate called The Emancipation Project (TEP) that particularly targeted people living in mostly Mandingo or Muslim dominated communities.

The reason for concentrating on these communities was obvious: people there were adamant to adhering to government’s regulations against burial, funerals, among others.

In some instances, the Armed Forces of Liberia had to be deployed in the Black Jinnah community to quell growing tension between residents and government over challenges associated with a corpse that was in a mosque – already smelling.

With support from Sekou S. Kanneh, then district 2 lawmaker, the government of Liberia through the Ministry of Internal Affairs gave us US$10,000 to increase sensitization across the district. Government didn’t say target the Mandingo or Muslim people; but it was obvious.

I received calls from Varney Sirleaf and Atty. Loseni F. Bility, both deputy and assistant Internal Affairs minsters at the time, to inquire what was going in our communities and what could be done to save lives. They were extremely helpful.

But there was need for more intervention because not only were people getting sick, getting abandoned and even dying, there were threats of conflicts and violence with religious and tribal undertones.

The National Mandingo Caucus of Liberia made an investment of US$50,000 to procure an ambulance to help government convey sick and dead people – basically to rid communities of potential Ebola patients.

That was atop so many monies spent on foods and medicals for families who accepted to self-quarantine. Many condemned the Caucus for spending so much on just one ambulance. But as the ambulance moved in communities to commute sick and dead people in Gardnersville and across Monrovia, we all realized that the amount spent on the ambulance was for a justified cause.

The investment towards sensitization in these Mandingo and Muslim communities were huge; and that was because the problems and challenges were equally huge.

So many people were dying. Confrontations abounded so many times at the Muslim cemetery in Old Road and Caldwell because non-Muslims thought their wells were getting polluted from the burials. Old Road residents set roadblocks to prevent grieving Muslims from burying their deceased. There were accusations of secret burial by Muslims. On the other hand, tension mounted among Muslims that they were being denied the right to pay last respect to their loved ones. The situation was tense.

There were even bigger resistances within the community itself. The government and international partners rallied Muslim scholars to research religious scriptures that permitted burning of dead bodies, especially during crisis. One class of scholars accused other of underestimating, if not disrespecting their level of education. Scholars who studied in Saudi Arabia and Egypt did not agree with those who studied in Africa and other Arab countries. There was a big divide between the majority Wahabis (Sunnis) and the minority Shia (that’s if they – Shia -actually exist in Liberia).

The Ebola crisis challenged everything Mandingo people have long understood as neighbourhood. There was chaos. Family fell apart. Marriages broke. Yet, they resisted accepting the realities of the challenges the crisis presented. They kept on pushing with life as they’ve known it to be – gathering people to boil and drink attayee (Chinese green tea); going to garages and running commercial traffic; running gas stations, shops and stores down Waterside. Before they realized that this wasn’t a movie, it was too late; just too late. Many have lost their lives.

I am not sure radio stations had programs where Mandingo announcers spoke sternly to their people about Ebola. For most part of the crisis, the mosques, where they would go and listen, disagreements among the Imams and scholars on whether or not to burn dead bodies took center-stage of the preachings. Imam hardly said anything much about preventing and protecting oneself from the virus during the early stage of the crisis. That changed later, but lives were already gone to the grave in shameful manners because my people kept doubting and denying. Some even took the risk of walking into hospitals and quarantine centers to take their sick relatives back to their homes.

I saw what Ebola did to my people. I saw it because I was there. I was on the frontline. Using a very old 2004 Honda CRV given me by MVK whose shaft and bolt joint would break anytime, I led ambulances to homes of suspected Ebola patients.

I do not know how I survived because some of the risks I took were glaring I didn’t deserve not contracting the virus. But I did survive. Thank God, and because of my experience, I am not letting myself or anyone die from a virus because, now, I know better.

Six years later, there is another virus pandemic, even more seemingly dangerous: Coronavirus. And as if the devastation meted out against my community by Ebola was enough a lesson, my community again is on the frontline of doubt and denial.

I am a member of almost every Liberia Mandingo chatroom on Facebook. The level of denial is exacerbating. There are recorded videos from relatives abroad cautioning people not to believe Coronavirus. The videos urged people not to accept any form of medication, even vaccination, for Coronavirus – warning such will only infect them with COVID-19. Can you imagine a Mandingo person in Italy, I mean Italy of all places, doing videos to dissuade people from believing in Coronavirus? Can you imagine that???

Just before President Weah released his Coronavirus song, bammmmm, musicians from Margibi County released a song supported by local leaders to create awareness on COVID-19; and my favourite HipCo rapper, Foloboye Kromah, murdered the track. Foloboye is from Kakata; and goes by his stage name Philipino Kingsarboso. Others call him the Mandingo Rap King – apparently to support his choice of name after Kingsarboso, the Mandingo king that threatened to behead Bassa kings who threatened to reverse a deal with freed slaves. The history of Liberia is never read without the mention of King Sao Boso Kamara – the great Mandingo King.

Philipino himself sent me the song on WhastApp. In just few minutes, I edited out his voice and edited it in an amateur mobile phone video. I posted it on Facebook. And, yes, Philipino reverted to me. “Brabee, RESPECT. EEkalor Wati Meenehnee? Me and my mehn demn want to an awareness song in Mandingo to educate our Mandingo brothers and sisters. We know what happened during Ebola. We don’t want a repeat.”

Before the end of the day, his colleagues, Odamz Sirleaf, called me up.  Before the end of 24hrs, I got a friend request from one Ahmed Sheriff. He introduced himself as Rockash. Like Odamz, I have always loved listening to Rockash songs but never really took time to make friends. They really have got good songs – but for over a decade now when City 90.2 FM introduced 24hrs broadcast of Liberian song, I slowed down on RNB songs. Odamz and Rockash are RnB artists – so they were on my radar.

I love HipCo, especially the ones with rap, no matter how dirty the lyrics. So, I biased out Philipino as my preferred HipCo artist since Nasty, PapGee, Lib All Stars and Neighbourhood All Stars went low on music.

Now, with Philipino, Odamz and Rockash settling in to do a collabo on Coronavirus, I was assured the pieces were patching themselves together. It’s going to be a bomb. By the end of the week, what I expected to be bomb, wasn’t really a bomb. It’s a rocket. Maybe even a torpedo – piercing through the heart, the mind, the soul and the body: Jangalojuba.

Jangalojuba literally means ‘deadly disease’ in Mandingo; and it doesn’t matter which Mandingo subdialect you speak, it still means ‘deadly disease.’ It’s still pronounced as ‘Jangalojuba.’ And this is what even attracts me and many others to the song. We all sing it the same way. We all understand it the same way. There is absolutely no controversy about the meaning of the song. It’s a pure song sung purely from the heart of the superstar trio; and sung strictly to the hearts of millions of Mandingo speaking people across the globe.

And luckily for us, this song comes from Liberia to the hundreds of thousands of Mandingo people who one way or the other lost a family, a friend, a relative or a neighbour to the deadly Ebola virus.

Can Mandingo people accept to loss a family, a friend, a relative, a neighbour or even themselves again to the new Coronavirus? I guess not. We suffer so much with the upbringing of our kids – we suffer so much to maintain our relationships and friendship – to let Coronavirus take them away from us. We cannot accept that because we now know what it takes to protect ourselves. We now have what it takes to protect ourselves; and one of those things we have to protect ourselves is the Jangalojuba song by our own brothers, the superstar Mandingo trio: Philipino, Rockash and Odamz.

But is listening to the song sufficient? I say no. Like Allah says ‘cursed is he who knows the Quran but refuses to educate others,’ I tell you Mandingo people, posterity will judge you if you don’t help these artists to spread the word to save our people.

Put your meagre resources together to support them. They need money to pay for airtime on radio stations. They need money to produce quality video for the song. They need money to rent a vehicle to do community outreach. The need money to keep themselves safe as they work to towards saving hundreds of other people through their songs. They are now our responsibility. We cannot faulter on that. We cannot let them down – because doing so at this particular time of their career means automatically killing their future. This is who they’ve chosen to be, and this is what we must support them to be.

These trio are leaders of a new revolution for the community; and you all know what I mean. If you’re a Mandingo, #GetUp, #StandUp for them.