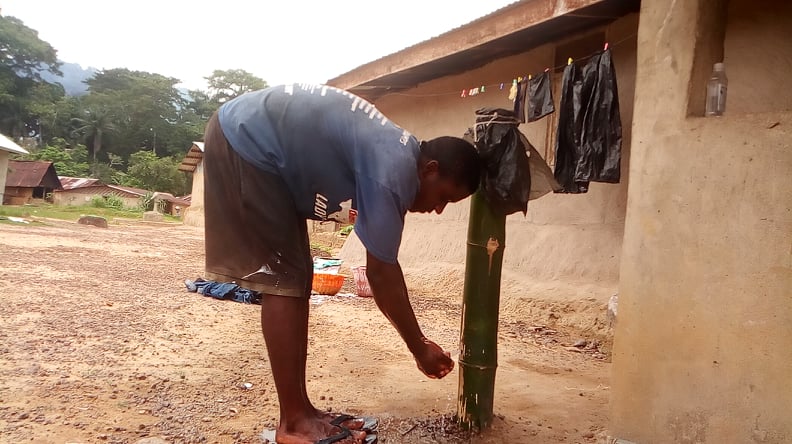 Gbarpolu County – It was an easy decision for Kamara David, 51, to reintroduce hand washing at the entrance of his residence once the county administration announced that frequent washing of hands is a means of preventing the spread of the coronavirus.

David had no bucket with faucet so he went into a nearby bush and fetched a big-size reed. This is what he used to facilitate the washing of hands during the Ebola outbreak between 2014 and 2016.

“I think of one of the good things to fight the Ebola from Liberia by the time government announced washing hand as part of the preventive measures,” said Mr. David, who lives in Farwen town – a five minute drive from Gbarpolu County’s capital, Bopolu.

“By the time I got the information about this virus, I rushed in the bush and cut a reed, brought it home, fixed it and told my family that it is time we start washing our hands like we did to beat the deadly Ebola virus.”

The 51-year-old drilled a four inch nail into three-feet-long reed and tied the nail with a rope. This allows the water, which is already mixed with powder soap, flows through the opening once the nail is removed. Visitors now have to watch their hands before entering Mr. David’s house.

“Whenever you remove that nail, you will directly get water to wash your hand and after washing your hands you put it back,” he explains, adding that he refills the reed whenever the water runs low.

Mr. David is one of many residents in Ferwn town who have turned to the reed-made-vessel to enable the washing of hands since the government announced that it was a measure to curb the spread of the pandemic. 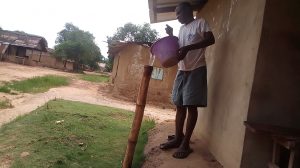 A man in Gbarpolu County pours water into a reed for the purpose for washing hands.

Medical experts have also advised that frequent washing of hands is one of the surest ways of stopping the transmission of COVID-19.

With over 100 houses with a population of over a thousand residents, nearly every household in Farwen town now has a reed-made-vessel mounted at its main entrance.

Residents of several other communities in Bopolu, Gbarma and Bokomu districts have also following suit. They have begun using the reed-made-vessel, storing water in it for washing of hands.

“By the time I got the information about this virus, I rushed in the bush and cut a reed, brought it home, fixed it and told my family that it is time we start washing our hands like we did to beat the deadly Ebola virus.”

During the Ebola outbreak in 2015, many people in these communities used reeds to store water for washing hands. That was because of limited amount of buckets.

Again, there have been limited donations of buckets with faucets to these residents.

”We received five buckets and distributed them to people who are doing business, because the bucket is not enough,” said Jenny Barclay, Farwen town chief.

“We encouraged everyone through our town crier to plant hand washing reed near their houses.”

The reed is useful for about six months and then would have to be replaced, he said.

It is unclear whether storing water in it makes the water containment thereby undercutting the purpose of hand washing.

However, residents say while they wait for donations of bucket with faucets, they will rely on the reeds.

“We are asking our big-big people for more [buckets] and the government to help us, but since they are not coming to our call on time, we will keep talking to our people about washing hand because this new sickness is not easy,” added Maima Varmah, the community women chair lady.

At a recent meeting in Bopolu City, the clinical supervisor of the County Health Team, Bennie Clark told residents that the Liberian government is not prioritizing the distribution of preventive materials to every household in the country.

Clark, who said the government could not afford such resources, also urged residents to joined efforts to curb the spread of the pandemic.

“Like President Weah said, our people need be smart in saving their own lives, their family and as well as helping the country proactively to containing this creeping coronavirus disease,” he said.

There have been no reported or suspected case of COVID-19 in Gbarpolu County, but the government has called for all communities to adhere to the basic preventive measures.

At the time of this publication, the Ministry of Health had announced that the county has 14 confirmed cases of COVID-19 and recorded three deaths caused by the virus.