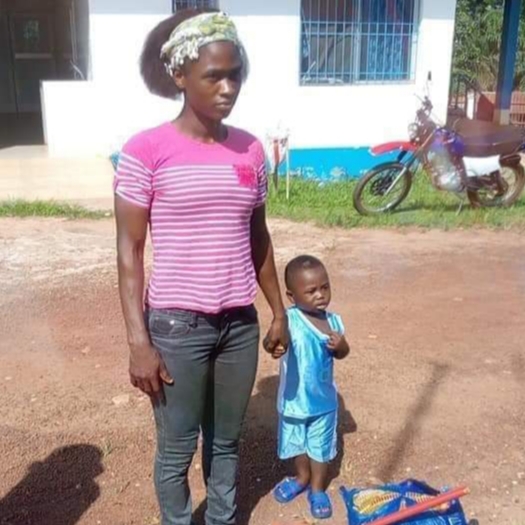 Grand Gedeh County – After spending two weeks in quarantine for being suspected for the novel Coronavirus, Jacqueline Doe, finally rejoined her four year old son and the rest of her family in Solo town, Grand Gedeh County.

In keeping with the health protocols, a brief ceremony was held on April 12 at the Gboliken clinic to turnover Jacqueline, 22, to her family.

She and her son were separately quarantined for 14 days at the Martha Tubman Memorial Hospital in Zwedru, where they were undergoing treatment and observation.

They had reportedly traveled from Ivory Coast, crossing through the illegal border point of Boe Town in the Nioa clan, Grand Gedeh County.

When she and her son sought treatment at the Gboliken clinic on March 26, she was suspected of COVID-19 and they were then picked-up by the district surveillance team and put into quarantine. The clinic is located in northern Grand Gedeh County about 5 kilometers from Zwedru. The clinic servers approximately 5,000 citizens.

Healthcare workers who came in contact with the lady and her son as well as their respective families were also placed under self-quarantined while the clinic was shut down by the county health team.

“Today we are here to reunite Ms. Jacqueline Doe and son with their family who we quarantined for suspected coronavirus case two weeks ago and at the same time to release my able 11 health care workers of Gboliken clinic,” said Dr. Augustine Fannieh, the County Health Officer.

“After careful observation and treatment for 14 days and testing her specimen two different times, Ms. Jacqueline Doe and her son have proved negative for the coronavirus disease.”

Gboliken clinic was also declared reopen and it has begun normal operations since April 13.

“Releasing you today does not mean that you cannot contract the virus,” Dr Fannieh warned. “The virus is right around us … Please stay safe. To us health workers, our safety comes first.”

Jacqueline thanked family members, friends and the county’s Christians council for praying for her as she stayed in quarantine.

She then recounted her experience, by explaining how she was taken into quarantine.

“When I arrived at the Gboliken clinic, my body was chilling and I believed it was cold, so the nurses asked me a lot of questions: when the sickness started? Where I came from?” She recalled.

Jacqueline said after responding to the questions from the health workers, she was then asked to be taken to Zwedru.

“When we came to Zwedru, we were placed in Isolation because they said I came from Ivory Coast and the country having Coronavirus so maybe I having it too,” she said. “I was crying – telling them that I don’t have Coronavirus”.

She explained how she cried and prayed during the many nights she was separated from her child and could “hardly eat the food they used to bring me in the morning, afternoon and evening”.

“I was alone, all day I stayed there, no one came close to me even my family members — we were only talking on the phone with words of encouragement that I was not going to die,” she said adding, “I regretted why I had to get sick and go for treatment to the clinic”.

“Today, for me to be released from quarantined and sleeping with family tonight, I give God the glory”.

Carine Baryee, the officer-in-charge of Gboliken clinic who spoke on behalf of the 14 health workers who were also released from self-quarantine, said they were “deeply worried” during the 14 days.

“We are happy to be released from quarantine today; we will start work on Monday, we should have started right now but have to go back home reunite with our families and come back to work,” Baryee said.

Meanwhile, Rev. Jelleh Winner Zulu, secretary general of Grand Gedeh Christians    Council, said now that the results of the suspected patients have come back negative, fear has greatly diminished among residents of the county. However, he warned resident against taking the preventive measures lightly.